He said he and his lawyers have encountered frustrating obstacles while preparing to take his case to an independent arbitration panel convened under the auspices of the U.S. Anti-Doping Agency. With no hearing date set and none likely until at least late spring, "I've pretty much written off this season," Landis said in an interview with ESPN.com last week. (Editor's note: Landis' USADA hearing was set for May 14 on Wednesday, Feb. 7). 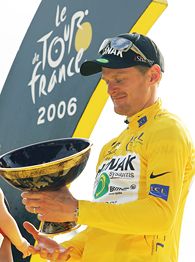 The 31-year-old rider, who has repeatedly denied ever taking performance-enhancing drugs, is disputing positive test results for an elevated testosterone-to-epitestosterone ratio and the presence of synthetic testosterone after Stage 17 of the Tour last July. His solo effort in the Alps that day enabled him to come back from a disastrous outing in the previous stage and eventually win cycling's most prestigious event.

Landis said he's confident he'll prevail and resume his career, but would rather put it on hold for the moment rather than proceed to the hearing before he and his lawyers have the evidence they feel they need to mount a complete defense.

"Right now," he said, "I want to believe that the right thing will happen and we'll get a fair hearing, as long as it takes."

USADA general counsel Travis Tygart said he is barred under confidentiality rules from discussing any specifics of the Landis case, but added, "We're ready to proceed. We want hearings done as soon as possible."

Whatever the arbitrators decide, the losing party would almost certainly appeal to the Court of Arbitration for Sport in Lausanne, Switzerland, which could tack another few months onto the process. Accused athletes cannot compete until the adjudication process is completed.

Landis spokesman Michael Henson said the main reason the hearing hasn't been scheduled yet is that lawyers are still trying to obtain documents they feel are critical to prepare the rider's case -- a process known as discovery.

The rules governing discovery in anti-doping arbitration cases are much more restrictive than they are in a U.S. criminal or civil court. Landis' lawyer Howard Jacobs, who has defended several high-profile athletes accused of doping including Olympic track star Marion Jones and cyclist Tyler Hamilton, requested a number of additional technical and scientific documents he argued were pertinent to the case last fall. His request was denied by USADA.

Los Angeles-based lawyer Maurice Suh of the Gibson, Dunn & Crutcher firm, a former U.S. attorney with experience in prosecuting public corruption and misconduct cases, formally joined the defense team in December. Suh and Jacobs are continuing "efforts to get evidence relevant to Floyd's defense," Henson said. "It's a real uphill battle for them to get basic pieces of information they need to conduct a fair hearing."

A three-member American Arbitration Association panel will hear the case. Each side picks one arbitrator, and those two choose the third. The panel selection was completed only recently, although the arbitrators' names have not been made public.

Under USADA rules, the athlete's hearing is supposed to be held within three months of the panel being selected, but Henson said that Landis' legal team has asked for an extension of that time to deal with discovery issues.

"We feel the legal process athletes have to go through is fundamentally unfair," Henson said. "In order for Floyd to get due process, it's going to take longer than we originally thought."

Tygart, while declining to comment on Landis' case, said he is confident the system works. "Any suggestion that the USADA process compromises any athlete's rights or is unfair is just a blatant distortion of the truth," he said. "The arbitration process is grounded in federal statute and contains all the safeguards to ensure due process."

Landis' lawyers could ask the arbitrators for documents they were not successful in obtaining from USADA. The arbitrators also approve witnesses for both sides, although they do not have subpoena power to compel witnesses to appear. Arbitrators' fees are paid by the U.S. Olympic Committee. Other administrative costs of the hearing are covered by USADA, while the athlete pays for his own defense.

If his test results are upheld, Landis faces a two-year suspension retroactive to last August and would be stripped of his Tour title. If his lawyers show that the test results were invalid, Landis would be free to sign with a team. His former team, Switzerland-based Phonak, fired him before folding under the weight of a series of doping scandals culminating with his case.

Landis is healthy enough to ride right now, though he's not in racing shape. The hip resurfacing surgery he underwent in September was a success, according to his personal physician, Dr. Brent Kay. Landis is walking and riding without pain for the first time since he fractured his hip in a 2003 training crash, necessitating two surgeries and leading to severe deterioration within the joint.

Dr. David Chao, the surgeon who performed the operation, also was able to slightly lengthen Landis' right leg to even it out with his left, correcting an imbalance triggered by the original injury.

In the weeks after the surgery, an upbeat Landis said he hoped he would be cleared to compete in this year's Tour de France, which begins July 7 in London and ends July 29 in Paris. He concedes that's out of the question now.

Landis recently held his third annual camp for amateur cyclists in Temecula, Calif., near his home in Murrieta. He appeared at ease, bantering with other participants, as he made his way up the challenging 12-mile, 21-switchback, 5,240-foot-high Palomar Mountain climb in the Cleveland National Forest outside San Diego.

However, he's not training regularly. "Between the end of the Tour and December 31st, I might have ridden 800 miles, maybe, in six months," he said. "I've not gone six weeks and ridden [only] 800 miles even when I was injured  but I have other things to do.

"I spend the same amount of time and energy trying to gain whatever resources are necessary and trying to learn what I need to learn, trying to solve this problem, as I spent trying to win the Tour. Every single day."

Landis invoked a never-before-used clause that entitles him to a public hearing, and has requested it be held at Pepperdine University Law School in Malibu, Calif., which he and his team contend has adequate facilities to allow reasonable access for the public and news media.

The Pennsylvania native said he is spending more than $100,000 a month on expenses related to his case. He recently started a legal defense fund in an effort to raise the $2 million he estimates he might need by the time the process concludes.

He said USADA should not have pursued the case because the evidence the agency received from the testing laboratory in France was deeply flawed. (Jacobs filed a motion to dismiss with USADA's Anti-Doping Review Board, which denied it.) Landis and his associates contend the lab data is riddled with clerical and scientific errors and have posted documents on the Internet to solicit feedback and build public support for his stance.

"They see it as a competition, too," Landis said of USADA. "They've even come out and said, in the press, 'We've never lost a case.' Well, if you're winning and losing, it's a competition. If you're looking for justice and trying to find out who's cheating, and you find out you made a mistake, and you drop it, you're not winning or losing, you're seeking the truth. It is a competition. It is to them, and it has to be to me."

He said he hopes a win in his case would help provoke change in WADA's testing and adjudication procedures, which are currently under internal review. WADA solicited feedback from its member organizations and will consider possible changes in its rules and sanctions at its annual meeting in November.

"That, to me, is more important than me right now," Landis said. "A lot of the damage is done whether I win or lose. To my way of thinking, the only good that can really come out of this is that no one has to go through this again."