MALIBU, Calif. -- The witness wagged his finger, wouldn't
let anyone get a word in edgewise and warned everyone not to stake
lives and careers on the basis of shaky scientific data.

No, Dr. Wolfram Meier-Augenstein, a spike-haired, jeans-wearing
expert with a pinky ring and German accent who proved Monday that,
indeed, not all dense scientific testimony has to be boring.

Flown to California in a private jet at Landis' expense, then
whisked away just as quickly so he could make his return flight
home to Ireland, Meier-Augenstein dominated most of the 8½ hours of
testimony. 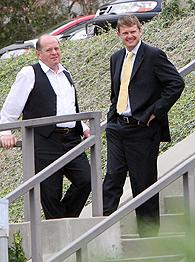 That delayed Landis' return to the witness stand for his
cross-examination, now scheduled for Tuesday, the eighth day of a
nine-day arbitration hearing. On Saturday, Landis told his story
during friendly questioning, saying "it wouldn't serve any purpose
for me to cheat and win the Tour, because I wouldn't be proud of
it."

A three-man arbitration panel will decide whether to uphold the
Tour de France champion's positive doping test, which would make
him the first person in the 104-year history of the race to have
his title stripped because of a doping offense.

On Monday, it was Landis' witnesses who spelled out the case
that the positive test after his Stage 17 comeback ride last year
was based on faulty scientific data.

"I'm terribly sorry, but if someone's life depends on it, his
career depends on it, you don't go on assumptions," said
Meier-Augenstein, an expert in the kind of testing that produced
Landis' positive result.

He said the process of trying to analyze what he said was sloppy
data was akin to "shooting fish in a barrel."

"Even cheaters have a right to a fair hearing and to have data
used against them that can be proved," Meier-Augenstein said.

Every bit as convincing, though maybe not as entertaining, was
John Amory, a University of Washington endocrinologist who
sometimes serves on the USADA review board.

The board is the first line of appeals for an athlete after he
tests positive for doping. If the board won't overturn a positive
result, the athlete's next option is to take the case to
arbitration.

Attorneys never asked Amory whether he served on the board in
this case. But Landis attorney Howard Jacobs did ask Amory why he
had become interested.

"The case didn't make a lot of sense to me," Amory said.
"Initially when I saw the documents, I thought there were
irregularities, first with the handling of the samples, then with
the results."

He testified that claims made last week by pro cyclist Joe Papp,
who said testosterone gel would help with recovery in a multistage
cycling race, didn't make sense to him based on the science he was
familiar with.

Amory also said the wild fluctuation in Landis'
testosterone-to-epitesosterone profiles during the dates
surrounding his positive test didn't make sense. The ratio went
from 1.5-to-1 and 1.8-to-1 to 11-to-1, then quickly back below
2-to-1 over the span of 10 days.

"I don't consider those results to be consistent with the use
of testosterone gel over that period of time," Amory said.

He also said data from the Landis testosterone-to-epitesosterone
screening tests didn't conform with results from the more detailed
carbon-isotope ratio tests that are administered to confirm the T-E
tests.

"They'd be down one day and normal the next" if the tests were
to corroborate, Amory said. "This doesn't look anything like
that."

During cross-examination of Meier-Augenstein, USADA attorney
Richard Young tried to punch holes in many of his claims, and
repeatedly stated that his experience didn't come in actual steroid
testing. Meier-Augenstein barely let Young get the words out,
interrupting frequently and giving long, multipart answers -- pausing after thoughts, then resuming just when Young seemed ready
to ask something new.

Meier-Augenstein said he was "baffled," "amazed," "totally
confused," about "nonsensical results" produced from tests done
on Landis' urine at the Chatenay-Malabry lab near Paris.

Asked to answer a question about comparisons between different
tests, he refused.

"That you cannot compare. I'm terribly, terribly sorry," he
said.

Given a chance to do redirect on the witness after Young was
done, Suh demurred, saying he'd rather make sure his witness get to
the airport to catch his private charter back to Washington, where
he would cross the Canadian border to make his business-class
flight back to Ireland.

Meier-Augenstein didn't want to fly in and out of the United
States. The cost of the special arrangements -- charter plus
business-class commercial flights to Vancouver -- was estimated by
one person in the Landis camp at $35,000. That person requested
anonymity because he was not authorized to discuss the
arrangements.

Also Monday, Landis' new manager released a letter acknowledging
former manager Will Geoghegan is "entering a rehabilitation
program today in an effort to address his problems."

Geoghegan called Greg LeMond last Wednesday night and, posing as
LeMond's uncle, threatened to reveal the secret that LeMond had
been sexually abused as a child if LeMond showed up to testify.

LeMond did testify, and moments after he told that story
Thursday, Geoghegan was fired. When Landis testified Saturday, he
said he had no idea Geoghegan was making those phone calls.

"To make light of that, I can't even put words to it," Landis
said.

"While Floyd and the entire team find Will's actions
regrettable and abhorrent, he is still a friend and we wish him the
best in his recovery," Kay wrote.