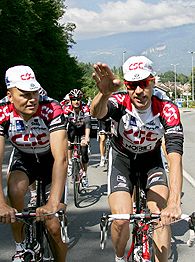 His admission Friday means the top three finishers in the 1996
Tour have all been linked to doping -- and two have admitted
cheating.

The retired Dane said he used the blood-booster EPO from 1993 to
1998, including during his 1996 Tour victory, confirming years of
speculation that he benefited from banned substances. He also
admitted taking cortisone and human growth hormone, but didn't say
when.

"I have taken doping. I have taken EPO," Riis said at a
televised news conference. "I have made errors and I would like to
apologize."

EPO -- or erythropoietin -- is a synthetic hormone that stimulates
the production of oxygen-carrying red blood cells.

Riis said he no longer considered himself a worthy winner of the
Tour, and indicated he would be willing to give back the title.

"My jersey is at home in a cardboard box," said Riis, now
manager of the Danish team CSC. "They are welcome to come and get
it. I have my memories for myself."

Cycling's governing body said even though time limits for
sanctioning Riis have expired, it "urges the former rider to
return his yellow jersey, the symbol of his victory."