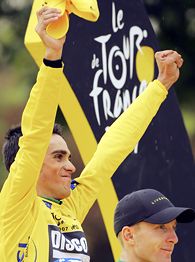 "I've never committed a doping offense. I've never been
involved in any act of doping," Contador said Friday. "My promise
against doping is absolute."

In a public statement read to the media, Contador said he
intends to do all he can to aid investigators in the fight against
doping.

"I am available to all competent authorities in the matter of
doping, and will answer any questions, including providing my
DNA," he said.

Flanked by Discovery Channel team boss Johann Bruyneel and
Spanish Sports Minister Jaime Lissavetzky, Contador said what
should have been a celebration after his Tour de France victory had
turned sour because of the constant accusations and news coverage,
even forcing him to have police protection.

"I have passed all controls ... surprise and scheduled, in my
house and at competitions, during racing and when not, of blood and
urine," Contador said.

"I find it impossible to understand the personal attacks
against me, putting in doubt my honor as a sportsman, from people
who don't know me. ... We have to make an effort to move forward in
believing in cycling and in me."

The Spaniard beat Australia's Cadel Evans by 23 seconds to win
in France after race leader Michael Rasmussen was removed by his
team after evidence surfaced that he lied about his whereabouts
during training to evade drug testing.

Franke said he has documents from the Spanish Operation Puerto
probe last year showing that Contador had taken a testosterone
booster and an asthma drug. Franke also turned over the documents
to the World Anti-Doping Agency.

But Contador had said he was mistakenly named in the Puerto
investigation, which was set off last May when Spain's Civil Guard
raided a Madrid clinic that allegedly provided doping services to
more than 50 riders. Police seized up to 200 bags of blood, blood
transfusion equipment and steroids.

Contador refused to provide DNA when questioned before a judge
last year and was subsequently pulled out of the 2006 Tour along
with members of his former Liberty Seguros team due to links with
the Puerto case.

"It was a ... sad and disillusioning experience that
transformed my vision of the sport, the sport that I've given the
best years of my life to," Contador said. "Last year, I always
practiced in a clean manner, with courage, work, resignation, and a
large dose of hope."

Contador said he would seek legal action against anyone making
defamatory accusations in the future, and would donate any
compensation won to the fight against doping.

"I don't know what else I can say," Contador said Friday. "I,
Alberto Contador, winner of the 2007 Tour, want to bring
credibility ... to the new generation of cycling."

No questions were allowed from reporters, and Contador left
swiftly after finishing his statement.

Meanwhile, the Italian Olympic Committee recommended Friday
that cyclist Cristian Moreni be banned for two years after testing
positive for testosterone during the Tour de France.