MADRID, Spain -- Oscar Pereiro finally got his hands on the
winner's yellow jersey from the 2006 Tour de France on Monday.

"Finally, we have a winner and it's Oscar," Tour director
Christian Prudhomme said. "Oscar, you have won the Tour out on the
road." 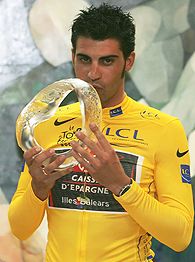 The Spaniard moved up from second to first after the
disqualification of Floyd Landis for doping.

"I have the feeling of arriving at the end of a thriller, after
having spent 14 months thinking about it and not being able to
concentrate as I should have on my job," Pereiro said. "It is
essentially a kind of release."

The International Cycling Union formally declared Pereiro the
winner on Sept. 21, one day after a U.S. arbitration panel voted
2-1 to remove the title from Landis for using synthetic
testosterone during the Tour.

It's the first time in the 105-year history of the race that a
winner has been stripped of the title.

"The moment I received the profit of my work, I had mixed
feelings, something between satisfaction and regret for what we
were deprived of," Pereiro said.

Pereiro stood on the top step of a podium with his winner's
jersey, not along the Champs-Elysees as a normal champion would but
in offices of Spain's Sport Ministry.

"These emotions, it is impossible to feel them in a ceremony
like this one, which is organized so that everyone understands and
sees that Oscar Pereiro is the winner of the Tour," the Caisse
d'Epargne rider said.