Kimmie Meissner's favorite school subject has been anatomy. Over the summer, she told a group of reporters about how excited she was to dissect a cat.

She didn't pass out from the formaldehyde. She didn't shy away from the blood and guts.

Her description was simple, yet unexpected: "It was cool."

Not exactly what you'd expect to come out of the mouth of a teenaged figure skating star. Typically, the sport conjures up images of sequins, makeup and beauty pageants. 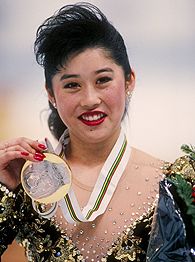 But Meissner, 17, isn't used to doing things the ordinary way. And although she's got a fresh and innocent look, don't be fooled. If she can dissect a cat without a hitch, chances are she won't flinch when she takes the ice.

In less than a year, Meissner has been transformed from a young up-and-comer to an Olympian to world champion. And she enters the U.S. Figure Skating Championships this week in Spokane, Wash., as the heavy favorite to win the national title.

Yet, in typical Meissner fashion, she's doing things the anything-but-typical way: She's trying to become the first American woman to win a national title after claiming a world crown since 1992, when Kristi Yamaguchi won her first, and only, U.S. crown. Yamaguchi is the only U.S. woman to achieve these feats in reverse order.

With nine-time U.S. champion Michelle Kwan sidelined with injuries and busy with school, and 2006 champion Sasha Cohen out pursuing an acting career, chances are pretty good that Meissner will match Yamaguchi's rare achievement. Meissner is still trying to improve the artistic side of her skating, but her jumping abilities are light years ahead of her top competitors, which include 2006 Olympian Emily Hughes, Christine Zukowski, Bebe Liang and Alissa Czisny.

Back when Yamaguchi was trying to win her first national title, the pressure was immense. The 1992 nationals were the precursor to the Olympic Games in Albertville, and Yamaguchi's top concern at the time was making the team (although, in hindsight, those worries seemed ludicrous).

"It just proves to me how tough it is to get out of the U.S.," said Yamaguchi, who won the Olympic gold medal in Albertville. "Once you get to worlds, there's a good chance to get to the podium. I always felt more pressure at nationals."

Nationals are never a skate in the park, but the thought of Meissner not making the world team seems utterly ridiculous.

Sure, she has room to improve; even she admits she's working hard to improve her overall skating. Earlier this month, she was in Hackensack, N.J., where she was fine-tuning her short program with Nikolai Morozov, one of the world's renowned choreographers.

"I think she's getting better all the time," Morozov said. "She's very young right now. She has not been skating for a long time, but she is growing and skating more like a woman than a kid. Right now, she has all the technical stuff. The only thing she can improve is as an artist on the ice, and she's paying attention to it."

When asked if there was any concern about her making the world team, Morozov laughed.

"I'm sure she's going to make the team," he said. "Before, I could see that when there was Michelle and Sasha, but I don't see anyone in the U.S. who can compete with her right now."

In a recent teleconference, Meissner suggested she would not attempt a triple axel at these nationals. So the pressure for her to land one, which she did back in the 2005 U.S. Championships when she won the bronze medal, is virtually gone. She still has two triple-triple combinations planned in her free skate.

Meissner can control what she does on the ice. Off the ice, she can't, and that's where she faces the real pressures.

Meissner now has the pressure of being the new face of American skating, aka "the woman who can save figure skating." The sport isn't riding its popularity wave these days as it did back in 1988 with the "Battle of the Brians" and the "Battle of the Carmens," and it has spiraled downward since it achieved triple axel-like heights in the wake of the Tonya-Nancy scandal in 1994.

This season, especially in the absence of Kwan and Cohen, practically demands that Meissner wins. Even though Kwan withdrew from the 2006 nationals with an injury, she remained the spirit of St. Louis. No doubt fans will still talk about Kwan this year, and for years to come. 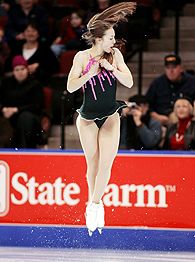 When asked if it's necessary for a U.S. woman be the star to grow the sport, Yamaguchi answered, "I think it helps, definitely."

The United States has a long history of female greats, from Tenley Albright to Peggy Fleming to Dorothy Hamill to, of course, Kwan. Although Tara Lipinski and Sarah Hughes captured Olympic gold, their careers were too short-lived. Combined, they mustered just one national title (Lipinski beat out Kwan in 1997).

Meissner finds herself in an odd spot. She is a world champion who is working her way into American households, and the skating federation wants her to be on top for a while, especially as she prepares for the 2010 Olympics in Vancouver.

In her hometown of Bel Air, Md., a suburb of Baltimore, Meissner is extremely popular. So much so that she has a street sign named "Kimmie Way," she was a grand marshal at several parades and she has even thrown out the first pitch at a Baltimore Orioles game.

Perhaps the strangest place she's spotted her photo is on the cover of her hometown phone book.

Nationally, she's had some exposure. She appeared on the ESPYS as a finalist for "Best Breakthrough Athlete" (the NBA's Chris Paul was voted the winner) and she's toured with Champions on Ice.

Still, she admits, there hasn't been of windfall in the way of endorsements.

Clearly, Meissner has big skates to fill if she's going to become the second coming of Kwan. Nine U.S. titles is an amazing accomplishment.

Meissner, right now, is realizing how hard it is to achieve No. 1.

Amy Rosewater, a freelance writer based in Baltimore, is a frequent contributor to ESPN.com.