WASQUEHAL, France -- One key rival down for Lance Armstrong, at least four others to go.

Armstrong turned two treacherous cobblestone stretches of the Tour de France to his advantage Tuesday, while Spain's Iban Mayo crashed in a blow to his title hopes. 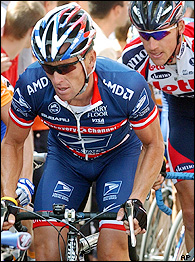 "Ugh, that's unbelievable," the Texan said in summing up the
difficult day.

But Mayo's disaster was the big news of the day, and resulted in
him losing 3 minutes and 48 seconds to Armstrong.

Mayo crashed in a dash by the main pack of riders to be first
onto the dangerous bumps, and couldn't make up the lost time even
though he resumed racing in torn shorts.

"It's terrible," said Julian Gorospe, sporting manager of
Mayo's Euskaltel-Euskadi team. "He fell at the worst time in the
race, when everyone wanted to be near or at the front."

The 26-year-old Mayo is a fearsome climber and could regain time
in the Pyrenees and Alps later in three-week showcase race.
Armstrong has said he favors Mayo to win a mountain time trial four
days before the finish in Paris on July 25.

But four minutes? Armstrong and the other top challengers would
have to experience disasters of their own for Mayo to stand atop
the winner's podium. Mayo risks falling further behind Wednesday,
in a team time trial where his squad is expected to struggle.

"Today, you could not win the Tour de France but you could lose
the Tour," Armstrong's sporting manager Johan Bruyneel said.
"Almost four minutes for Mayo is a very, very important gap."

Armstrong's U.S. Postal Service team performed well in the
130-mile race from Waterloo, Belgium, to Wasquehal, and helped to
shepherd their leader over the dangerous cobblestones.

The team was the first to negotiate the initial 1.7-mile bumpy
path, and were near the front of the pack at the second section
about 15 miles from the finish.

"It's just a matter of fighting. You have no friends except
your teammates," said Postal veteran George Hincapie, his face
caked with grime. "We wanted to get to the cobblestone section
first, just like the rest of the 200 guys ... We did it.

"Lance was right on my wheel and it worked out great," he
added.

Armstrong was grateful for the teamwork.

"I had some experienced guys there to help me," Armstrong
said.

Mayo was 151st out of the 184 riders that finished. He trails
Armstrong by 4 minutes, 7 seconds after just four days of racing.
Armstrong will duel for the lead with Ullrich and the other
remaining challengers in later mountain stages and time trials.

Ullrich and Armstrong finished with the same time Tuesday, five
seconds behind Nazon. The French rider's stage win was the second
of his Tour career. He also won the prestigious sprint on the
Champs-Elys Dees in Paris at the finish last year.

Overall, Armstrong still carries a narrow 15-second lead over
Ullrich, 16 seconds over Hamilton, 27 seconds over Basso and 35
seconds over Heras, the Texan's former teammate who now leads a
squad of his own. Armstrong built those time gaps with a speedy
second place in the debut time trial that began the Tour last
Saturday.

McEwen, winner of Monday's stage, took the overall race lead on
Tuesday and the cherished yellow jersey that goes with it because
of time bonuses earned from his sprinting. But his goal is to win
the green sprinter's jersey at the finish in Paris. He is not a
threat for the overall title.

"I would have preferred to have won the stage. But it's great
to wear the yellow jersey in the Tour de France. It's a first for
me," the 32-year-old Australian said. "It was a difficult stage.
Very hard."

At least four other riders were caught in the crash that took
down Mayo. They included Italian Marco Velo, whose Tour ended with
him nursing a broken collarbone in a roadside ditch.

The cobblestones usually form part of the Paris-Roubaix race, a
grueling classic known as "The Hell of the North." Not since 1985
had the Tour veered onto cobblestones. Some teams and riders
complained that they should not have been included in cycling's
showcase race.