SACRAMENTO, Calif. -- Tim Montgomery and girlfriend Marion
Jones can watch the Olympic 100 meters together. Neither one will
be in the races. 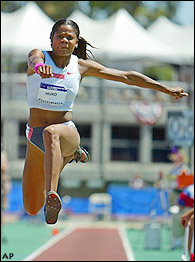 One day earlier, Jones was fifth in the women's 100 final,
losing out on a bid to defend her gold medal in the Athens Games.
Both left the track area amid a horde of reporters, pausing only
long enough to rip the media for the coverage of the steroid
scandal that has unfolded around them.

"This is the reason I didn't win: I've got y'all on my back,"
Montgomery said. "I have to deal with y'all every day."

Montgomery has bigger problems away from the track. The U.S.
Anti-Doping Agency has accused him with using steroids and other
performance enhancing drugs. If found guilty, he could be banned
from the sport for life.

Montgomery has taken his case directly to the international
Court of Arbitration for Sport, where the decision is binding.

He is one of four sprinters accused by USADA with steroid use.
If found guilty, they all face lifetime bans.

Michelle Collins, one of those facing the charges and a favorite
in the women's 400, withdrew from the meet Sunday, citing a
hamstring injury, her coach said. George Williams, also the coach
of the U.S. Olympic men's team, said she phoned him from Texas to
say she was injured on the warmup track in Sacramento and had
returned home.

Another member of that quartet, Chryste Gaines, failed to
qualify in the women's 100.

That left Alvin Harrison as the only one of the four still
running at the trials. He made it through the first round of the
400 Sunday.

Jones has not been formally accused of an any drug offense, but
remains under investigation by the USADA. She has repeatedly,
firmly denied ever using performance-enhancing drugs.

After her poor showing Saturday, she followed a beefy bodyguard
off the track to a golf cart that took her away.

Montgomery is finished, but Jones will be back at the Cal
State-Sacramento track Monday night for the long jump qualifying.
She also is entered in the 200.

Greene, who turns 30 on July 23, appeared ready to defend his
gold medal in the 100 with a meet-record 9.91 clocking. Justin Gatlin was
second at 9.92 and Shawn Crawford third at 9.93. The top three in
each event make the Olympic team.

"My goal is to go 1-2-3 and show the world we have the best
sprinters," Greene said.

Crawford has the world's fastest time this year, 9.87 seconds
last month in the Prefontaine Classic.

"I think I'll win it" in Athens, Crawford said. "I'm through
being humble."

Greene's comeback from a broken leg in a 2002 motorcycle
accident is complete.

"Greatest of all time, what can I say?" he said.

That's what the "G.O.A.T" tattoo on his right biceps stands
for. There's also a lion in the tattoo, representing Greene's
self-proclaimed status as king.

"And the track is my jungle," he said.

By winning, Greene prevented a sweep of the sprint titles by
coach Trevor Graham -- whose pupils include Gatlin, Crawford and
women's 100 champion LaTasha Colander. Graham is the former coach
of Montgomery and Jones, who dumped him last year.

Montgomery, Jones and dozens of other athletes testified before
the grand jury that ultimately indicted four men connected with the
Bay Area Laboratory Co-Operative. The four men, including baseball
star Barry Bonds' personal trainer, have pleaded innocent to
distributing steroids to top athletes.

Harrison finished second in his opening-round heat of the 400 to
advance to Monday's semifinals. Also advancing was his twin
brother, Calvin, who faces a two-year suspension for failing two
drug tests.

"Everything will be OK, so just keep your thumbs up and keep
the smiles going," Alvin Harrison said. "Everything's all
right."

Joining the Harrisons in the semifinals was world champion
Jerome Young, who recently had his 2000 Olympic relay gold medal
taken away because of a failed drug test in 1999.

Sheena Johnson, who just completed her senior season at UCLA,
won the 400 hurdles in a world-leading 52.95 seconds, the fastest
time by an American on U.S. soil.

Johnson, Brenda Taylor and Lashinda Demus had the three fastest
times in the world in making the U.S. team in the event.

Tim Mack won the men's pole vault, but failed in three attempts
to break the U.S. record of 19-9½. He will be joined in Athens by
Toby Stevenson and Derek Miles. Defending Olympic champion Nick
Hysong finished fifth and failed to qualify.

World champion Dwight Phillips easily won the long jump. The
event was absent his chief rival, Savante Stringfellow, who is out
for the season with a torn Achilles tendon. Stringfellow is known
for donning a "Superman" shirt between jumps.

"I brought the Spiderman suit," Phillips said, "but it was
too hot to wear today."