BIRMINGHAM, Ala. -- Eric Rudolph has agreed to plead guilty
to carrying out the deadly bombing at the 1996 Atlanta Olympics and
setting off three other blasts in a deal that allows the
anti-government extremist to escape the death penalty, Justice
Department officials said Friday. 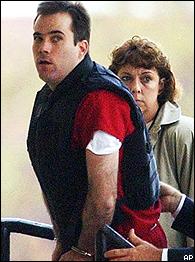 "The many victims of Eric Rudolph's terrorist attacks ... can
rest assured that Rudolph will spend the rest of his life behind
bars," Attorney General Alberto Gonzales said.
Rudolph, 38, is scheduled to admit his guilt Wednesday in court.
The plea deal calls for four consecutive life sentences without the
possibility of parole. Rudolph had faced a possible death sentence.
Defense lawyer Bill Bowen did not immediately return a call
seeking comment.
Rudolph, thought to be a follower of a white supremacist
religion that is anti-abortion, anti-gay and anti-Semitic, was
charged with carrying out a series of blasts in Georgia and Alabama
in the late 1990s that killed two people and injured more than 120.
One woman was killed and more than 100 people were injured in
the Olympic blast, caused by a bomb in a backpack. In the next two
years, he allegedly set off bombs at a lesbian nightclub in Atlanta
and at two abortion clinics -- one in Birmingham and one in Atlanta.
The Birmingham attack killed an off-duty police officer and maimed
a nurse.

Rudolph then slipped away into the mountains of western North
Carolina, where the former soldier used survivalist techniques to
live off the land for more than five years -- all while being on the
FBI's list of 10 Most Wanted fugitives. Then in May 2003, he was
captured after being seen scavenging for food near a grocery store
trash bin in Murphy, N.C.
Jury selection in the Birmingham bombing began this week.