By any normal measure, Henry Ongechi ran a great race Monday at the Boston Marathon. The 33-year-old jumped out with the first pack and hung near the leaders throughout the race. By the time he crested Heartbreak Hill, there were about 20,355 competitors in his wake.

But normal measures don't apply to Ongechi. He's a native Kenyan, one of a tiny group of countrymen who have dominated distance running around the world in recent years, especially here, at the world's most prestigious footrace. The top three seeds and nine of the top 20 were Kenyan. Every year, race officials invite dozens of top Kenyan runners to start with the first pack in Boston. This year, Ongechi was ranked last of them all.

To another runner with his background, a No. 71 seed might provoke ennui, or even despair. To Ongechi, it represents something of a triumph.

"This is my second chance," he said.

Let's make it clear from the beginning: Unless you are one of a handful of elite runners, among the fastest people ever born, Henry Ongechi is much faster than you. He qualified for Boston by finishing seventh in the Baltimore Marathon, running the course in 2:27:18. That's a mile every five and a half minutes or so.

"Put the 100th-ranked Kenyan in any decent road race in America at any point in time and they're either going to win or come in top 10," said Dave McGillivray, Boston's race director.

In the past year or two, Ongechi has regularly earned podium spots at races near his home in Chapel Hill, N.C. He won the Cary Road Race, a 10K, in 33:01. He finished third in the 2004 City of Medicine Road Race 15K, with 49:18. Results that good would be worth a lifetime of bragging rights to an ordinary runner. To Ongechi, it's merely an early step in a career that now resembles a distance race more than a sprint.

"This is my first time at Boston," he said. "And it's only my second marathon."

A decade ago, Ongechi looked like another rising star in a long line of successful Kenyan distance runners. "In Kenya, we are so many athletes," said Joshua Kipkemboi, who won the master's division on Monday. Ongechi was right there among them, on his way to a storied international career. Then he began feeling sudden, crushing pains in his side.

"The doctors in Kenya were not able to discover what was wrong with me," he said.

He dropped out of racing and was working as a mechanic in southern Sudan when he fell in love with a University of North Carolina professor working with an NGO in that troubled country. They married, and she brought him to Chapel Hill, where doctors discovered the source of his pain: gallstones. He had surgery and found himself back on his feet.

There was no way to get those six years back. But there was no reason not to go running, either.

"I set a goal to run for five years and see what I can accomplish," he said.

He did well in local road races and very well in Baltimore. Which is how he found himself standing with the first group on the starting line in Hopkinton on Monday morning. The day was sunny and clear, with the temperature at the start right at 70 degrees and a slight headwind. In those conditions, the first pack was relatively slow to jump out -- the first five kilometers took just 15:54, a time that would win many 5K races, but 32 seconds shy of a course-record pace. Ongechi didn't crack the top 10 at the first checkpoint, but he remained embedded within a pack of about 30 runners, right at the leaders' heels. 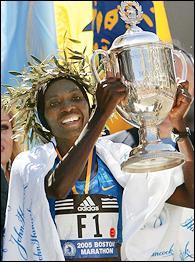 The pack passed the 10- and 15-kilometer checkpoints and still Ongechi held position. But as the race neared the halfway point, Ongechi's strength began to fade. Not significantly. In an ordinary race, he'd be so far out front that nobody would notice. But in the Boston Marathon, a tiny fade -- in this case about 18 seconds spread over the course of a single mile -- is magnified by competitors with extraordinary speed.

"I was feeling strong and the weather was very good in the beginning," he said. "So I didn't notice that I wasn't taking water and I became very dehydrated."

At the 25-kilometer mark, Ongechi was running miles in 5:26. The leaders, however, were still hammering them out in five minutes flat. Each interval took slightly longer and runners who hadn't gotten a good start began passing him. Now he started drinking water and recovered some speed. In the hills on the later part of the course, though, it wasn't enough to get back his earlier position.

He finished 88th. It wasn't anything for him to cheer about. But at least he knew where he'd gone wrong.

"I can blame myself," he said. "It wasn't the weather. I can't blame anything that happened. I can do something different and do better."

At first glance, Ongechi still has a lot of hurdles in his path. And he can't yet compare himself with the most successful Kenyans. The top finisher in Boston earned $100,000. Ongechi's seventh in Baltimore was good for $600. He doesn't belong to one of the elite training teams scattered around the country. His wife serves as his agent. Yet he's happy to run until something makes him stop. Maybe he can catch up with some of those fellow Kenyans who, for half the race, were just a few tantalizing steps ahead.

Aaron Kurilofff is a freelance journalist and a regular contributor to ESPN.com. He can be reached at aaron.kuriloff@gmail.com.