AIGLE, Switzerland -- Cyclists or teams competing alongside
banned riders, even in unsanctioned races, will face one-month
suspensions by the sport's governing body. 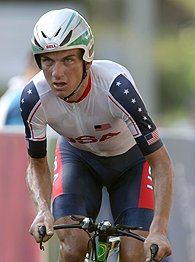 The International Cycling Union saw photos on a Web site of
Olympic gold medalist Tyler Hamilton in a race last week in his
hometown of Boulder, Colo. Hamilton, who is serving a ban for blood
doping, dropped out of the Stazio Criterium Series after UCI
contacted USA Cycling.

UCI spokesman Enrico Carpani said Tuesday that while his
organization cannot stop suspended cyclists from competing in
unsanctioned races, it will take action against licensed
professionals racing alongside banned riders.

"We told U.S. cycling that in the future any rider or team
participating in a race, even a nonsanctioned race like in Boulder, with a banned rider like Tyler Hamilton could be suspended for
one month," Carpani told The Associated Press.

"If Tyler Hamilton wants to take part in this race, he can, and
we can't stop him. But all other riders and all other teams then
cannot participate in that race. If they do, they can be
suspended."

Hamilton tested positive in September 2004 for having someone
else's red blood cells in his system, about a month after winning
the road time trial at the Athens Games. He is suspended until
early 2007.

Hamilton also tested positive at the Olympics, but the results
were invalidated because one sample was accidentally frozen and
could not be examined.