LEKSAND, Sweden -- With the World Junior Championship coming to a close, here is my open letter to USA Hockey:

Congratulations on your 2-1 victory over Sweden for the bronze medal at this year's World Junior Championship. A shot at the gold came down to a shootout in the semifinals against Canada, and, truth be told, there was nothing really to choose between the teams. Might as well have decided the game by flipping a coin. Both teams had great goaltending and strong blue lines that were all but impenetrable. Neither team could generate any offense at even strength as two goals in the game came on the power play. You are right to think that you didn't deserve to lose. 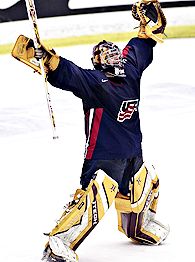 First off, you didn't bring the best team you could have. You left several deserving players at home. If you're going to tell me that Bobby Ryan (Owen Sound Attack) shouldn't have been here because his skating might have been exposed on the Olympic-sized rinks, save it. The day your team was knocked out of the chase for the gold, Ryan won honors as the Ontario Hockey League's player of the week. In the OHL, he is a dominant player and he faces a lot of players who are members of the Canadian team here. There's no doubt that a resourceful, creative player like Ryan could have been a difference-maker. You picked him to play last year in the world under-20s in Vancouver and he has raised his game since then. If somehow he's alienated people in your organization, simply by choosing to play major junior instead of going through the USA Hockey development program, get over it.

Ryan's teammate in Owen Sound, defenseman Bobby Sanguinetti, also deserved to be here. He would have had a clear role. Sanguinetti isn't a load like either Erik Johnson (University of Minnesota) or Jack Johnson (University of Michigan), but he's faster than both of them. He would have had a useful role, rushing the puck up the ice. He could have been used on the point on the power play. Using Peter Mueller (Everett Silvertips of the Western Hockey League) must have seemed like a good idea at the time, but most pro scouts in attendance at the tournament said he would have been better utilized on the half boards. But you know and they don't, right?

Like Ryan, Mark Mitera (University of Michigan) played in Vancouver and wasn't brought here. Pro scouts will tell you that he should have been a lock to make this team.

There are others who could make the list. Nick Foligno (Sudbury Wolves of the OHL) could have filled a role as a defensive pest to shut down the likes of Jonathan Toews. He would have lent some grit in the way that Steve Downie does for Canada.

But let's just say that the list ends here.

You could have brought these players without disrupting the team because, as you have done before, you carried players on your roster who sometimes didn't play four shifts the entire game. You went to the well with your first two lines up front and leaned on your first four defensemen to the exclusion of anyone else. You're lucky you didn't have any major injuries in the tournament because you would have started playing guys who had only been sightseeing on their trip to Sweden.

Bringing your best creates competition within the ranks of your team. This U.S. team lacked that, and suffered for it.

You can argue your case. Here's your space.

"We were going to play James van Riemsdyk [from the national under-18 program], but after we dropped our first couple of games, we had to shorten our bench and go with our best players," U.S. coach Ron Rolston said after the bronze-medal game.

Where's the logic in that? In a short tournament, where a medal might be riding on every shift, you have to live in the present tense. You can't be thinking about next year.

The worst problem for USA Hockey, though, runs deeper than roster selection and line combinations. It goes to the culture around the team. Canada has been more successful at this tournament than the U.S. over the years, and Canada has won tournaments and made finals with teams no more talented than their U.S. counterparts, sometimes less talented.

If you asked most NHL scouts who attend this tournament, the difference is clear: The Canadian kids buy into the team program. They're like the New England Patriots. The U.S. kids fit the team into their program. I won't go as far as comparing them to T.O., but you get the idea.

It's a broad generalization, and several players did play their hearts out without a hint of attitude, no one more so that forward Kyle Okposo (University of Minnesota). Still, there's a lot of ego. Some of it might be encouraged by parents' meddling. Some of it might fester because of agents on the fringes. But some of the U.S. players, very talented players, play up the "me."

The Canadian team, well, they're just grateful to get the call. Even Sidney Crosby (yes, he would have been eligible to play on this squad) had no problem playing a limited role in his first trip to the under-20s. No. 87 was happy doing the dirty work, while Patrice Bergeron shone in Grand Forks a couple of winters ago.

The Canadian way at the World Juniors isn't perfect. Still, you could learn from it. You always could have. I wonder if you never will.

Gare Joyce is a frequent contributor to ESPN The Magazine.