RIO DE JANEIRO, Brazil -- A Pan American Games silver medal
earned by a bunch of college baseball players bodes well for the
United States in next summer's Olympics. Of course, the gold that
Cuba grabbed for the 10th straight time is a powerful reminder of
who dominates the sport internationally.

The Cubans won 3-1 Friday morning. The Americans, who went 4-0
to reach the final, were no match for the solid pitching of Adiel
Palma. The U.S. team managed only four hits off Palma, who was 2-0
in Rio and struck out nine in the gold medal game.

Pedro Luis Lazo allowed one hit in getting the save with 1 1/3
innings of relief. Lazo struck out three in a row before Pedro
Alvarez (Vanderbilt) doubled with two outs in the ninth. Justin
Smoak (South Carolina) then flew out to center field.

"It was a tough loss, but I thought we played well," said
manager Mike Weathers, who has won three silver medals against Cuba
as a player (1971), assistant (2003) and manager (2007). "We
couldn't solve their pitching.

"Both teams played very well. We should be very proud to win a
silver medal. We overcame a lot and accomplished many things. These
guys will take home a lot of memories." 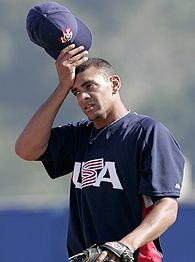 Although most of these players have little chance of going to
Beijing, where a team of minor leaguers not on 25-man rosters will
be chosen, the Americans should get a boost from their performance
in Rio.

USA Baseball's executive director, Paul Seiler, was encouraged
by how impressively the team played in getting its sixth silver
medal behind the Cubans. He noted the rain delays and poor field
conditions that plagued the tournament.

Had the weather not cooperated Friday, the Americans would have
forfeited because they had a flight out of Rio at night and a
series of games with China upcoming.

"It's unbelievable considering everything they have gone
through in the last week," he said. "Words can't describe how
proud I am of them and how well they represented our country.
Unless you had been down there and experienced what they have, you
can't understand the magnitude of what they achieved."

The Cubans took a 2-0 lead in the third on a two-run double by
Alexander Mayeta, and added a run in the fourth. The Americans
answered with one run in the bottom of the fourth, driven in by
Smoak's single.

Jacob Thompson of Virginia was the loser as the United States
used five pitchers who allowed 10 hits.

"We're proud to beat a good team like the United States to win
our 10th [gold] medal," said Cuban manager Rey Vicente Anglada.
"It's always a great rivalry because each team gives it all out on
the field."