LAS VEGAS -- Team USA was trailing by three points late in overtime and had the ball for a game-tying shot.

First, Kobe Bryant caught a pass on the perimeter and hoisted up a jumper, failing to square his body to the basket before rising and releasing. No good.

After an offensive rebound, the ball was flipped out to Carmelo Anthony for another rushed J. Again, no good. 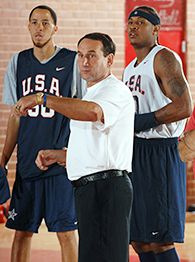 The senior U.S. team's opponent, a squad comprised of younger American NBA players, was poised for an upset victory as Al Jefferson grabbed the rebound, was fouled and went to the line with 1.5 seconds left, needing only a free throw to clinch the win. But after missing the first attempt, Jefferson was told by his coaches to miss the second intentionally, removing the remote possibility of a four-point play at the buzzer.

Jefferson did as ordered, and when the ball caromed off the rim and was grabbed by Anthony, four senior team players -- Anthony included -- yelled and/or signaled for a timeout.

"Timeout!" Anthony yelled again in exasperation, only to have the referee stare at him with a "You've got to be kidding me" look on his face. (Under international rules, only coaches can call timeouts, and only in dead ball situations). The final 1.5 seconds ticked off the clock, and the unthinkable had happened: Team USA had lost, looking particularly bad in the process.

It was a comedy of errors, really, with the seniors getting beat on the boards, leaving their feet with no idea whether they planned to pass or shoot. They showed no alacrity in attacking a tight 2-3 zone defense in which an extra defender stationed right in the middle of the paint clogged up everything and denied all the usual drive-and-kick opportunities that the American players take for granted.

That scene played out last Saturday afternoon at Team USA's training camp, illustrating just how different things can be when basketball is played under international rules. Whether or not it was telling to see the Americans make so many mental and tactical mistakes, in a way it was just like watching last summer's semifinal loss to Greece all over again. Everything that could go wrong did go wrong, and the result was something almost no one imagined possible -- the U.S. team losing, not because of a lack of talent, but because of a lack of execution and a questionable utilization of personnel by the coach trying to end what will be an eight-year gold medal drought (in main world competition) by the time the 2008 Beijing Olympics roll around next summer.

"There are a lot of games being played here, and the game [plan] was not to use the whole group at that point," a slightly embarrassed coach Mike Krzyzewski explained after the scrimmage loss.

Krzyzewski cautioned that he might have substituted a shooter into the mix when he needed that tying 3-pointer, but with the outcome of the scrimmage not mattering, he wanted his big three to try a little end-game execution on their own.

"LeBron [James] and Carmelo played together last year, but Kobe didn't. So that's the thing we have to get going," he said.

Krzyzewski has settled on only three starters thus far, naming Bryant, James and Anthony to those spots, to be mixed and matched with different point guards and centers as the Tournament of the Americas plays out over the next week and a half.

The uninformed might wonder: "How could they possibly lose with those three playing together? To which the informed might reply: "Hey, that's three guys on the court at the same time who, no matter how good they are, all need the ball in their hands to be effective. It'll be tough to make that work."

That'll be the case less so in Las Vegas this summer than it will be a year from now in Beijing, where at some point it might come down to a question of whether Krzyzewski can convince one of those players to subjugate his ego for the good of the team and to take a seat on the bench so that another pure shooter, or another big man, can be brought in at a crucial juncture. But at least for the next 12 days, the learning curve won't be very steep for the Americans, who should be able to waltz through this Olympic qualifying tournament virtually unchallenged to secure one of two berths available for Beijing.

The big date is Sept. 1, when the Americans will play a semifinal game, likely against Brazil, Argentina, Puerto Rico or Canada -- to clinch a spot in the Olympics. The Sept. 2 gold medal game is virtually meaningless.

Although Brazil is arriving with an accomplished roster that includes NBA players Nene and Leandro Barbosa, the defending Olympic champions from Argentina are showing up with only two of their NBA players, Luis Scola and Carlos Delfino, and will be hard-pressed to capture one of the two Olympic berths. Puerto Rico always has a solid team (it beat the Americans in Athens), but none of these three squads should be able to keep up for 40 minutes with an American team laden from top to bottom with premiere NBA talent.

But then again, never forget that the strangest of things happen in international basketball, and nothing is ever certain. If the shots aren't falling, if the opponent's pick-and-roll is clicking, if their nerves get the better of them when they find themselves trailing, the Americans can go down. It happened three times at the 2002 World Championship, three more times at the 2004 Athens Olympics, and once last summer in Japan when Team USA was outcoached and outexecuted by Greece, denying Team USA a chance to play Spain in the gold medal game for a chance at an automatic berth in Beijing.

"Hopefully everything goes well here, and in Beijing against some of the European teams that go big, we might have to look at something different," said Krzyzewski, whose reluctance to go big against Greece was exploited last summer in Japan and played a major part in the Americans' failure in their semifinal loss.

"In the Tournament of the Americas, Brazil will have it, but most teams won't have the size. But with the Olympics, the team we pick will have to have some bruisers," Krzyzewski said.

Krzyzewski, team director Jerry Colangelo and the players who went to Japan seem to have been humbled by the events of a year ago, and all have been open to changes addressing the most troublesome issues.

Opponents packed in their defenses against Team USA and dared a team with no pure shooters to shoot, which was a problem. So the solution was to bring in Redd and Miller, two players capable of executing the catch-and-shoot plays that are a staple of international ball. Tony Ronzone of the Detroit Pistons was brought in as the new head scout, with USA Basketball recognizing that Ronzone's familiarity with the individual tendencies of foreign players would be of superior value compared to old scout Rudy Tomjanovich's more X's and O's-related focus. USA Basketball even went so far as to fly in an actual FIBA referee, the same guy who was staring quizzically at Anthony as he tried to call that timeout at the end of last Saturday's scrimmage.

That scrimmage loss was an eye-opener, too, for Bryant, who took to the court with James immediately afterward and practiced catch-and-shoot jumpers for the next 20 minutes.

"If teams are going to play pack-it-in defenses, we've got to be able to knock down those shots," Bryant said. "We've got a couple guys who are used to catching and shooting, the rest of us -- myself, LeBron and Carmelo -- aren't used to that. So we've got to get acclimated to playing that style of basketball."

Over the next 11 days, they will, and there's a 99 percent probability that they'll emerge from Vegas with a gold medal and an Olympic berth.

And one year from now, when the level of competition is 10 times higher and the stakes umpteen times more important, it'll be a question of whether Team USA has grasped and adapted to the differences between FIBA and NBA basketball.

Heading into this tournament, it was clear from its scrimmage that the team isn't there yet.