LAS VEGAS -- There are two ways to look at this one, really.

We can be all bubbly and positive, spending all our time rehashing how undeniably great Team USA looked in the first quarter, shooting 80 percent from the field (including 92 percent on 2-point shots) and looking as dominant as any American team has since the original Dream Team was steamrolling random Latin American nations a decade and a half ago.

Or, we can summon our inner antagonist and give 'em a good second-guessing, focusing on how they managed to allow one of the weakest teams in the Tournament of the Americas to score 100 points on them.

Folks in other parts of the world are going to seize upon that latter fact and question whether the Americans are as good defensively as they've been made out to be, and it's a fair point.

So I brought up the subject with coach Mike Krzyzewski in his postgame news conference Monday night following Team USA's 127-100 victory and caused him to do a double-take by asking if allowing 100 points could in any way be seen as an ominous sign.

"Whatever sign somebody wants to make of it," Coach K said with a half-chuckle. "I mean, we scored about 130 points, so it was one of those games where there was a lot of fouls, just a different kind of game, but to their credit, they never gave up. They played every second of the game. For us, we need to move on. We can play better than we played tonight, but you win by 30, I'm not going to complain. That's a good thing."

This was a night when the Americans took their foot off the gas after the first quarter and went through the motions the rest of the night, shooting nearly 60 percent from the field but allowing Mexico to outscore them 28-20 in the second quarter and stay within striking distance through most of the third. Mexico, a 51½ point underdog, knocked down 15 3-point shots, almost all of them wide-open looks, and had a lot of success running the same pick-and-roll play that Greece used so effectively against Team USA in the semifinals of the World Championship last summer.

This game even included the unlikeliest of sights: Kobe Bryant getting his ankles broken on the perimeter by Mexico's Romel Beck, who grew up a Lakers fan in San Bernardino, Calif., and played collegiately at UNLV. Beck faked a move to his right, shuffled quickly to his left and hit a 3-pointer; Bryant fouled him on the shot, and Beck completed the four-point play. 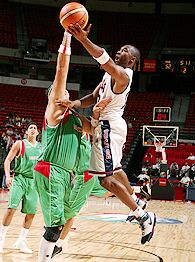 The crowd -- if you want to call it that, because there were only about 1,000 people in the stands -- actually mocked Bryant with a slow "Ko-be, Ko-be" chant after the play, and I have a sneaky suspicion there were a few jabs thrown Kobe's way on the bench, in the locker room and on the team bus afterward.

"He has tremendous upside," Bryant said of Beck.

Once again, Carmelo Anthony led the U.S. in scoring with a game-high 28 points. Bryant added 21, LeBron James and Dwight Howard added 19 each, and Michael Redd had 15. Krzyzewski made two changes to his starting lineup, replacing Howard with Amare Stoudemire and Jason Kidd with Chauncey Billups, although he said he may switch back to the old lineup for Tuesday night's game against Puerto Rico.

Tayshaun Prince sat out with a sprained ankle, although Krzyzewski said he could have played if needed. Also, Tyson Chandler did not get off the bench until late in the fourth quarter, logging just 3:59 of playing time while cementing his status as the team's 12th man, a role previously held by Brad Miller and Emeka Okafor on the last two versions of Team USA. And just so he knows it didn't go unnoticed, Mike Miller had a very poor game, shooting 1-for-6 from the field to fall further behind Redd (and Joe Johnson) in the battle to decide who will be the designated shooter or shooters off the bench next summer in Beijing.

Team USA has been in Las Vegas for more than two weeks now, and at some point the players' fatigue was going to catch up with them. It just so happened that it caught up with them on a night when they were playing a team they could beat in their sleep, and let's be honest, none of them was going to be kept awake by the thought of how they managed to surrender 100 points to Mexico.

But this game still could come back to haunt them sometime down the road, because every team that has to face Team USA next summer will want to see a tape of what worked so well for Mexico on the offensive end.

So take this blowout with a grain of salt.

Yes, Team USA looked awfully awesome when needed. But the U.S. also looked extremely vulnerable to the types of plays that have worked against them in the past, and they're going to continue to see those very same plays down the road when the competition is going to be a whole lot tougher than what they're facing now in Vegas.