LAS VEGAS -- Four All-Stars fired perfect passes to each
other, ending when Kobe Bryant turned LeBron James' behind-the-back
toss into a dunk that brought the loudest cheer of the night.

Just like that, the Americans had shown a glimpse of what they
think U.S. basketball can look like again.

Carmelo Anthony scored 17 points, Bryant added 14, and the
United States rolled to a 112-69 victory over Venezuela on
Wednesday night in its opening game of the FIBA Americas
tournament.

"I think tonight we really wanted to be aggressive from the
get," Anthony said. "That was real important. I think tonight
that was our main goal, to go out there and dominate. Not try to
embarrass, but dominate, and I think we did a good job at that."

Michael Redd also had 17 points, Amare Stoudemire scored 16 and
Dwight Howard 12 for the Americans, who improved to 27-0 in the
regional Olympic qualifier. The Americans face the U.S. Virgin
Islands in the final game Thursday night.

"The tournament's going to get a lot harder than we had
tonight, but as a team I think we played well," James said. "We
shared the ball well. We did everything that we needed to do to win
a basketball game."

Bryant was making his long-awaited international debut, while
Anthony was the leading American scorer last year at the world
championships. They needed a little more than a quarter to show
they could be a formidable duo. 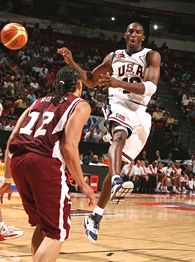 Jason Kidd and Howard started along with James, Bryant and
Anthony, the three starters coach Mike Krzyzewski had already
named. All 12 players saw action in the first quarter, which ended
with the Americans up 21-8 after some shaky shooting.

Bryant was scoreless and Anthony had only four points in the
opening period, but they didn't stay quiet for long. Both scored
seven points in a 16-6 spurt early in the second quarter that broke
open the game and extended the lead to 39-16 on Bryant's 3-pointer
with 5:23 left in the first half.

Both players were involved in the highlight play of the game.
Kidd leaped to keep a high pass from going out of bounds along the
sideline, quickly tossing it back to Anthony. He fired it to a
cutting James, who passed behind his back to Bryant for a dunk,
drawing a roar from what was otherwise a fairly quiet crowd in a
Thomas & Mack Center that appeared less than half full.

"Incredible play," Bryant said. "The public now has a chance
to see what's been going on behind closed doors, some of the
amazing plays that guys are making."

The Americans led 54-34 at halftime, and the advantage ballooned
into the 30s after the starters outscored Venezuela 14-2 to open
the third quarter. James' steal and breakaway dunk made it 68-36.

Greivis Vasquez scored 12 points for Venezuela, which will face
Canada on Thursday.

The Americans were forced to play in the qualifier after failing
to win the world championships last year. They returned this year
with a stronger roster, particularly in the backcourt, where
Chauncey Billups and Redd joined Bryant and Kidd.

All the U.S. problems haven't gone away, though. The Americans
missed seven of their first nine 3-point attempts and were only
20-for-29 from the free throw line, two of their biggest weaknesses
in recent years.

Those may not matter much over the next 11 days. The United
States has hardly been challenged in three previous appearances,
with only one game being decided by single digits, and isn't
expected to have any trouble earning one of the tournament's two
spots for the 2008 Olympics.

James scored 11 points and Mike Miller, who limped off the floor
after committing an offensive foul in the closing minutes, had 10
for the Americans. Kidd, who didn't attempt a shot in 15 minutes,
and rebounding and shot blocking specialist Tyson Chandler were the
only players not to score.