LAS VEGAS -- Kobe Bryant had nothing to worry about when he
was forced to the bench with foul trouble.

Now he has Michael Redd as a backup.

Redd replaced Bryant and hit a flurry of 3-pointers to turn the
game into an early rout, and the United States beat the U.S. Virgin
Islands 123-59 on Thursday night in the FIBA Americas tournament.

"He's ready to come in at any time," U.S. coach Mike
Krzyzewski said. "Most shooters need time to find their rhythm.
He's ready right away and he knows he's subbing for Kobe. Obviously
he's a key guy for us and that's something we did not have last
year."

Redd and Carmelo Anthony each scored 22 points for the Americans
(2-0), who put together a dominant stretch immediately after Bryant
went to the bench with his second foul less than 4 minutes into the
game on his 29th birthday.

Mike Miller and Amare Stoudemire added 13 points apiece for the
Americans, who shot 15-of-30 from 3-point range and had all 12
players score.

"We have so many weapons, we have so many threats, and it just
makes our job that much easier," Bryant said. "You just have to
come in and plug in the holes when you're called upon, step in and
do your job."

The Americans are off Friday before closing pool play with games
Saturday against Canada and Sunday against Brazil.

Kevin Sheppard scored 11 points for the Virgin Islands, whose
best player can't play for them. Tim Duncan started playing
internationally for the United States in 1996, and once that
happened the St. Croix native became ineligible to play for his
home team. But he also wouldn't play against them, sitting out the
Americans' 113-55 victory while playing for them in the 2003
Olympic qualifying tournament.

The Virgin Islands, with former UCLA and Georgia coach Jim
Harrick on their bench as an assistant, also got nine points from
Carl Krauser, Kitwana Rhymer and Jason Edwin.

The Americans scored only 21 points in the first quarter of
their tournament opener, but needed only 5 minutes to reach that
total Thursday.

The Virgin Islands got within 17-9 with 6:15 left in the first
quarter when Edwin drew Bryant's second foul while scoring. Redd
replaced Bryant and scored 13 points, hitting three 3-pointers,
during the Americans' run of 17 straight points that made it 34-9. 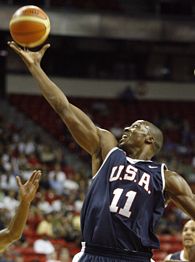 "It's a different role coming off the bench, but at the same
time I've been here before backing up Ray Allen my first couple of
years in the NBA, coming off the bench and expected to score
immediately," Redd said. "That was my role five or six years ago,
so I had to go back to that, be professional, ready to go."

Miller and Chauncey Billups made 3s later in the quarter, with
Billups' shot at the buzzer giving the United States a 42-13 lead.
The U.S. was 13-of-17 from the field (76 percent) in the period,
including 8-of-10 from behind the arc. Redd had 15 points in 5
minutes.

"Guys like Mike Redd and Mike Miller come in and hit shots like
that, it's hard to beat us," guard Deron Williams said.

The lead was 66-39 at halftime, and the third quarter quickly
became festive. Fans in another small crowd at the Thomas & Mack
Center sang "Happy Birthday" to Bryant while he was shooting free
throws,

Bryant said the serenade was "a little uncomfortable."

"First time that's ever happened," he said before leaving the
arena with his family for a quiet celebration. "But that was fine,
I appreciate it."

The Americans had a pair of highlight-reel plays a few minutes
later. Kidd threw a pass off the backboard so James could throw
down a dunk, and Bryant found Howard with an alley-oop pass for an
80-44 lead.

Krzyzewski also had his team play some zone in the second half,
something he has said the Americans would use at some point.

Redd is being counted on to improve the Americans' perimeter
shooting, their biggest weakness in recent years, and so far he's
delivering. The Milwaukee Bucks guard was 3-of-5 behind the arc and
scored 17 points in Wednesday's 112-69 victory over Venezuela, and
added four more 3s Thursday.