LAS VEGAS -- Nolan Richardson yelled, gestured and stomped
around just like it was a national championship game.

Mike Krzyzewski was on the other bench with his usual intense
stare.

The setting was different from the last meeting between the
coaches, but one thing hadn't changed: Richardson's teams still
fight for 40 minutes.

Mexico kept the game respectable into the second half before the
United States pulled away for a 127-100 victory Monday night in the
second round of the FIBA Americas tournament.

"I was talking to Nolan before the game and he said his team
was in great shape, and they were," Krzyzewski said. "They kept
making shots no matter how many we went up. They never gave up.
They just kept making shots and that's to their credit."

Carmelo Anthony scored 28 points, tying the American record in
an Olympic qualifier. He had 16 in a sensational opening quarter,
when the Americans shot 80 percent from the field.

But the Mexicans, who sneaked into the second round through a
three-team tiebreaker, outplayed their more talented counterparts
for much of the next two periods before the U.S. put them away for
good late in the third. 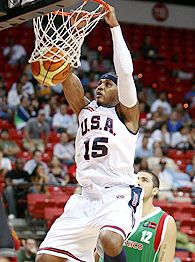 "I'm not into moral victories, but I am into the fact we came
back and played extremely hard that second quarter, and that's how
my teams have always been," Richardson said. "We never give up
and that's why they call it '40 minutes of Hell.'"

Mexico rarely showed the pressure defensive style the Richardson
used at Arkansas, but hustled for offensive rebounds and shot
15-of-28 from 3-point range to hang around.

Kobe Bryant added 21 points, and LeBron James and Dwight Howard
had 19 apiece for the United States, which led by only 15 points
midway through the third quarter after beating its first four
opponents by 48.4 points per game. The Americans face Puerto Rico
on Tuesday night.

"They kept playing hard," Anthony said. "The Mexico team
never gave up, they fought all the way to the end.

"We've been beating teams by 40, 50 points, so when we win by
20, 25, it don't look right. But at the same time, it was an ugly
win but we take it and we're going to get better. I guarantee we're
going to get better and be ready for tomorrow."

Romel Beck, who played for UNLV, scored 20 points for Mexico,
which plays Brazil on Tuesday.

Richardson beat Krzyzewski for the 1994 national championship
when Arkansas edged Duke, but had little hope of winning this
matchup. Still, he didn't coach any differently.

Richardson, his hair and mustache now gray, could easily be
heard hollering instructions at his players over a Thomas & Mack
Center crowd of just 4,028, and gestured frequently during a
lengthy discussion with a referee moments after Howard had knocked
a pair of Mexican players to the ground late in the first half.

Richardson chatted with Krzyzewski and U.S. assistant Jim
Boeheim, another NCAA champion, before the game. But it wasn't long
before Richardson had little to smile about.

Krzyzewski made a pair of changes to his starting lineup, going
with Chauncey Billups over Jason Kidd and replacing Howard with
Amare Stoudemire. It didn't affect the Americans at the start.

However, Mexico outscored the United States 28-20 in the second
to make it 65-51 at the break. The smallest U.S. halftime lead had
been 19 points Sunday against Brazil. The Americans pulled
comfortably ahead early in the third, but Mexico battled back
again, pulling to 82-67 on Victor Mariscal's 3-pointer with 4:45
remaining.

"Today was one of those days for us, we've been playing five of
the last six days, we were going through the motions a little bit
at first," James said. "They're definitely a good team. Nolan
Richardson's definitely put together a good team and they shoot the
ball really well."

The Americans eventually broke away for good, but the Mexicans
still had one last highlight. Beck, who came in as the tournament's
No. 2 scorer with 22.8 points per game, had a four-point play late
in the third after Bryant fouled him on a 3-pointer.

The Americans played without reserve Tayshaun Prince, who
sprained his ankle Sunday against Brazil.

Krzyzewski said Prince would play Tuesday and that the normal
lineup would return.