Pau Gasol of the NBA's Memphis Grizzlies scored 23 points and
Jose Calderon made some big plays down the stretch in Spain's 82-77
victory in the first semifinal. 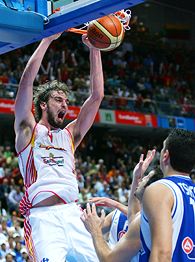 In the second, Andrei Kirilenko had 29 points and three blocks,
and Russia withstood 30 points from Ramunas Siskauskas for a 86-74
victory that put the Russians in their record 19th final.

"We showed that when we have to fight in difficult moments, we
know how to respond," Calderon said. "It was a really tough game
... even the coaches had to play hard in this game. It was a war."

After the Toronto Raptors' Jorge Garbajosa hit two free throws
to give Spain an 80-76 lead with 18 seconds to play, Theodoros
Papaloukas lost the ball as he drove the lane. Juan Carlos Navarro,
who also finished with 23 points, then hit two free throws at the
other end. Calderon, a Raptors guard, scored 18 points.

Vassilis Spanoulis led Greece with 24 points and five assists in
the game played before a capacity crowd of 15,500.

Spain reached its sixth final in a bid to become only the third
nation to lift the European crown while holding the world title. It
beat Russia 81-69 in the group stages.

The Spaniards set the tone against Greece from the start, taking
a 37-26 lead with 5:16 to play in the second.

But Spanoulis scored seven points during a 13-4 run and Greece
closed to 41-39 at halftime.

"This tournament we have not quit, not once," Russia coach
David Blatt said. "In this tournament, we have played to win."

Holden finished with 18 points and Chicago Bulls forward Victor
Khryapa chipped in 15 for Russia, which returned to the final for
the first time in 15 years.

Russia held a 25-12 first period lead behind 67 percent
shooting, but Lithuania slowly rallied, pulling within 40-33 at the
half.

Siskauskas' jumper at 4:01 of the third capped a 17-9 run that
drew Lithuania even for the first time.

But Kirilenko answered, scoring eight of Russia's next 13 points
and blocking a dunk attempt as Russia moved back out 65-54.

"He's the best player in Russia, one of the best in the
world," center Nikita Morgunov said of his teammate.

Greece will play Lithuania Sunday with the winner automatically
qualifying for next summer's Olympic Games.

Earlier, Dallas Mavericks forward Dirk Nowitzki, who finished
with 26 points and 10 rebounds, hit a clutch basket with 12 seconds
to play as Germany rallied for a 69-65 win over Slovenia that gave
the Germans a chance to qualify for next summer's Beijing games.

Croatia also earned a place in a pre-Olympic qualifying
tournament in July with an 86-69 win over France, which got 18
points from San Antonio Spurs guard Tony Parker.

France will play Slovenia on Sunday for the last spot in the
qualifying tournament. The two teams, along with Germany and
Croatia, were eliminated in the quarterfinals.

Spain had already clinched a place at next year's Beijing
Olympics thanks to its world championship win over Greece last
year.