LENZERHEIDE, Switzerland -- After a five-month season, it
all came down to seven-hundredths of a second -- the margin by which
Aksel Lund Svindal won the World Cup overall title. 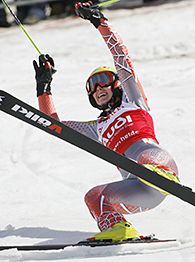 Needing a finish of 15th or better to ensure victory over
Austria's Benjamin Raich, Svindal finished 15th in the slalom
Sunday in the final World Cup event of the season. Raich won the
race, but finished 13 points behind Svindal in the overall
standings.

The women's overall crown went to Nicole Hosp, who won a giant
slalom to hold off Austrian teammate Marlies Schild. Julia Mancuso,
who fell out of contention for the overall title a day earlier, was
11th Sunday to finish third overall -- the best showing by an
American woman since Tamara McKinney was third in 1984.

"I think that it was really cool to be a contender to the
end," Mancuso said.

Svindal completed Sunday's two runs in 1 minute, 43.62 seconds
to place 15th, just ahead of Martin Hansson's time of 1:43.69. Only
the top 15 finishers earn points, and Svindal would have lost the
title by three points if he had finished further back.

"I was so nervous at the finish line," said Svindal, the first
Norwegian to win the overall title in eight years.

"The overall World Cup title is the greatest prize there is,"
said Svindal, who also won the giant slalom and combined titles
this season. "To win it in the last run, in the last race of the
season, is just crazy."