Sometime before noon in Central Park on Sunday, Shalane Flanagan should cross the finish line of the NYC Marathon. That, alone, will be no small feat for the 40-year-old former Olympic runner.

Now consider this: She will become the first person to ever run the six World Marathon Majors in just six weeks. 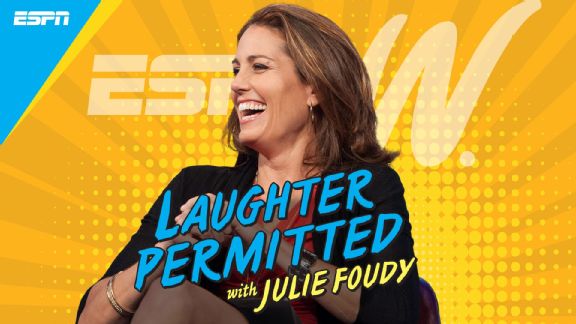 Flanagan talks with Julie Foudy and Lynn Olszowy about the incredible journey the marathons have been, how she's doing something that "lights her soul on fire" and why she hopes she's proof positive that sport is for life. Listen

Because of the pandemic, the Boston, London and Tokyo Marathons were moved from their traditional spring dates to October, and now all six races are being staged in a 42-day stretch for the first -- and likely only -- time.

"When I saw how the marathon schedule unfolded, it felt like a once-in-a-lifetime opportunity," said Flanagan. "I coined it an eclipse because it was just so rare this would ever happen. It didn't take long for me to think, 'Why shouldn't I be the one to do it?'"

While Flanagan is no stranger to the marathon distance -- she won the New York Marathon in 2017 -- her mission is all the more improbable as she is technically retired, after announcing her departure from the sport two years ago.

"My retirement coincided with two reconstructive knee surgeries, and I basically couldn't run for a year. Then we hit a pandemic," Flanagan said ahead of Sunday's race (8:30 a.m. ET, ESPN2/ESPN App). "During that time I became a mom and a coach, so there were a lot of life changes, and I realized how much of my mental health is tied into running. I actually really need running. It's not a job for me, it's a passion. I missed having goals. Athletes are so goal-oriented and everyone was goal-less during the pandemic.'"

She set a sub-three-hour goal for each of the races and has shattered the mark in each race so far, including a 2:35:04 time in London.

Her current quest has pushed her physically and mentally but she's loved every minute of it. Joined by her 18-month-old son Jack as well as a tight-knit, all-female group that includes her physical therapist, a photographer and a Nike brand manager, Flanagan has awed fans around the world with her globe-trotting journey.

But it's just Shalane being Shalane, according to those who know her best.

"Shalane is always the type to just go after something," said 2020 Olympic steeplechase silver medalist Courtney Frerichs, who trains with Flanagan at Bowerman Track Club in Portland, Oregon. "I remember a few weeks after she won in New York [in 2017], she was back in training with us, fully right back in it, and I could barely keep up with her. That's just who she is.

"I wasn't surprised when she said she was doing this but I have been surprised at just how much fun she's having with it."

For many athletes, the idea of running 157.2 miles of competitive races would hardly be the retirement dream, but most athletes aren't Flanagan, who made a career of the unexpected. She was the first American woman to win in New York in 40 years when she crossed the finish line first in 2017 and is one of just two Americans to medal in the 10,000 meters at the Olympics. Flanagan earned the bronze medal in Beijing in 2008 (and it later was upgraded to silver following a failed doping test by Elvan Abeylegesse). She's always blazed her own trail.

And she didn't venture far away from the sport after officially retiring. She almost immediately began coaching at Bowerman, where she had been based for over a decade. She now worked with many of the younger runners she had been training alongside, including Frerichs.

"She was the driving force in creating a women's team here. She's always been such a leader and has truly always wanted to help others succeed," Frerichs said. "When I look back at this last year, she has played such an instrumental role."

While she helped her runners focus on preparing for the delayed Olympic Games in the winter and spring of this year, Flanagan herself was in the early stages of preparation for her six-marathon quest. She and her husband Steven Edwards had adopted their son Jack in April of 2020, and Flanagan struggled to find time to run. She didn't fully dedicate herself to training until after she returned from Japan in August.

Berlin, the first marathon on the abridged 2021 calendar, was scheduled for Sept. 26.

"I basically prepped in six weeks, which is really short in the marathon world," Flanagan said. "But given the context of my lifetime of training, it was appropriate. I wouldn't recommend that though for most people."

Flanagan's personal marathon best of 2:21:14 was set on the same German course in 2014, and while she knew she wouldn't be able to replicate that pace for one race -- let alone six -- she wanted to ensure she was giving her goal all that she had. So she set the sub-three-hour mark for herself.

In Berlin, she did just that, and clocked in at 2:38:32. She shaved more than three minutes off her time just a week later in London. A feat made all the more impressive as Jack, mainly sheltered at home during the pandemic, experienced his first cold during the European leg, which meant Flanagan also got sick. But she pushed through -- so much in fact, she had to walk briefly during the race as she experienced "brutal" pain in her legs.

The hardest stretch came eight days later in Boston. She had run the Chicago Marathon less than 24 hours earlier.

"I knew that two-day stretch was going to be exceptionally hard and I prepped as if doomsday bad stuff was going to happen," said Flanagan. "I knew I had to be on top of every little detail and I think that's why it went so smoothly. As soon as the race started in Chicago, I thought, 'Okay, I have to start recovering for Boston.' I had my meals planned out, my hydration, and even took the dreaded ice bath in Boston that night so I would have no regrets the next day. It worked."

She ran the Boston Marathon in 2:40:34 -- six minutes faster than she had done in the Windy City.

On Oct. 18, just a week after Boston, Flanagan hosted her own marathon in Portland, as a stand-in for Tokyo, which was held virtually. Wearing a bib that said "Jack's Mom" and joined on the course by Frerichs for the final 10 miles, Flanagan finished in front of a group of family and friends at 2:35:14.

"To be with her at the end of the marathon, a week after she ran two other marathons, and to see her working through so much pain was incredible," said Frerichs. "And then she got that time, I was just like, 'Oh my gosh. How?'"

Flanagan then had 19 days, her longest off-stretch, to prepare for New York. She's spent as much time as she can recovering and fueling her body as best as possible. But she hasn't exactly laid low. Her latest cookbook -- her third with her former college teammate and nutritionist Elyse Kopecky -- was just released last week. Flanagan said many of the recipes and rituals in "Rise and Run" have gotten her through the past several months and joked she and Kopecky became very popular when they passed out their own homemade muffins at the Chicago marathon to other runners.

With New York as the site of one of her greatest professional achievements, and a place that has always felt special to her, Flanagan said it feels fitting to end this journey there. But, despite the struggles and the pain, she isn't exactly looking forward to it coming to a close.

"I'll be sad it's over," Flanagan said. "I didn't think I was going to enjoy it the way I have, but I think it's a testament to just the people I've included on my team to help me do this. I'm going to miss traveling the world with my crew of women and my son. We've just had a blast. The post-race celebration always includes French fries and champagne, so how could that ever be bad?"

After Sunday, she said she has no plans to run for at least a month. But the break likely won't last much longer than that.

"I think at the end I'll be thinking of how much fun we've had. I guess now I've got to dream up another hard challenge."