Olympic gymnast Aly Raisman spoke with reporter Morty Ain about what it was like to take it all off for ESPN The Magazine's Body Issue and how much work goes into a one-and-a-half minute routine. For more from the 2015 Body Issue, check out espn.com/bodyissue! And pick up a copy on newsstands starting July 10.

I guess I'm considered "older" for a gymnast. I'm 21 and I'll be 22 in the Olympics year [2016 Rio Games]. If I make the team, I'll be the oldest U.S. gymnast. My body is a little bit more achy than it was before, but at the same time I feel like I'm smarter now and able to understand the recovery process. I always joke that I'm 21 going on 50.

I'm not sure training seven hours a day is completely healthy. That's why gymnastics is a young girl's sport. But I should be fine. It's not like I'm going to be doing this until I'm 30 or 40. I'll let you know in 10 years if I have arthritis and everything [laughs]. 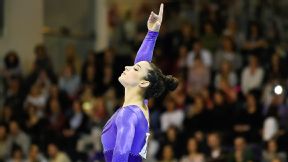 That's when I'm most comfortable: sweating in a gym, covered in chalk. I spend the majority of my days in a leotard. Most girls are used to wearing heels and dresses, and I'm used to being in a leotard with no makeup on. I love that. It's kind of all I've ever known.

I totally pulled a Jennifer Lawrence. A lot of the Olympians went to the Golden Globes, and I was walking down the stairs and I totally tumbled down the stairs in front of all the male Olympians. I'm really clumsy. I can do anything on a 4-inch-wide beam, but when I walk down the street in sneakers, I'll trip and fall on my face.

After one Olympics, most people are just burnt out. They just kind of want to be done. After 2012, I took a full year off. [Teammate] Gabby Douglas and I did. We needed a break. It's just repetitions after repetitions. There's no offseason. But at the same time, you always have to keep your goals in the back of your mind.

I should be more proud of myself, but I'm such a perfectionist. At the last Olympics I got two golds and a bronze, but I think more about the fact that I didn't medal in the All-Around than the fact that I did really well. That kind of pisses me off -- I always think that it's never good enough. I almost fell and put my hand down; it was stupid, I never make that mistake on the beam. I'll have a second chance at it, but I think about it all the time. I wish I didn't have to learn that valuable lesson at the Olympics.

We train our whole lives for that one moment. You work your whole life for a minute-and-a-half beam routine. I work out six days, 32 hours a week for the dream of competing at the Olympics again. I'm always eating healthy, always going to bed early. Everything I put into my body is for the purpose of gymnastics.

My coaches always tell me I'm chicken. I'm really afraid to do a lot of stuff in gymnastics. It looks easy or fun, but when you're trying to learn all these crazy skills, it can be a little terrifying. When I actually think about how narrow the beam is or how high the bars are or how much it hurts to fall, that's what freaks me out.

Every day is a challenge. Even though at the 2012 Olympics we were so happy to win the gold medal, every day is not like that. I think people don't understand that; people don't see that side of the sport -- the frustration, how much it takes a toll on your body, and mentally as well.

"You work your whole life for a minute-and-a-half beam routine. I work out six days, 32 hours a week for the dream of competing at the Olympics again. Everything that I put into my body is for the purpose of gymnastics." Aly Raisman

Outside the gym, I'm super messy. In the gym, everything has to be perfect. All the girls at training camp fight over who doesn't have to room with me because I'm so messy [laughs]. I've been rooming with Gabby a lot, and Gabby will get so annoyed with me.

I can do rope climbs without using my legs, only my arms. Before the last Olympics, I would put a 10-pound weight between my legs and climb the rope all the way to the ceiling.

You can always spot the gymnast. They are so ripped and so strong. Even if I was just wearing a T-shirt, my arms would just be more muscular than other girls'. If we were playing sports, I would just crush them. Even now, when I race against a guy, I always think it's fun to beat them because they get so upset.

I don't hear anything during a competition. I'm so focused, I can block out everyone except for my coaches and my teammates. When I was competing in the London Olympics during the beam final, there were thousands of screaming people in the stands, but the only voice I could hear was [teammate] McKayla Maroney. She was talking me through the beam routine the whole time.

Yeah, I got drug-tested at Access Hollywood. It was so weird. I was part of the USA drug-testing pool at the time. You have to give them an hour, every single day, when they can randomly test you. It was the final week of Dancing With the Stars, so I text them the night before: "I'm going on Access Hollywood at 8:30 a.m." So [the testing official] came right at 8 o'clock. It was like they purposely wanted to be at Access Hollywood. I was also tested at Game 6 of the 2013 Stanley Cup finals. They weren't allowed to come into the arena because you need a ticket, so I had to leave the arena and go across the street. It's Game 6 of the Stanley Cup! Am I just going to have them come in the stall with me?

I've never had an eating disorder, and I'm proud of that. I think gymnastics in the past had a bad reputation for that, but it's not an issue anymore. I've never seen an issue among the girls on the national team.

I think imperfection is beauty. Instead of being insecure about my muscles, I've learned to love them. I don't even think of it as a flaw anymore because it's made me into the athlete that I am.

This is an online exclusive story from ESPN The Magazine's Body Issue 2015, online on July 6 and hitting newsstands July 10. Subscribe today!