USA Track & Field hammer thrower Amanda Bingson spoke with reporter Morty Ain about taking it all off for the Body Issue, her American record in the hammer throw and what she'll do if she wins gold in 2016.

Dense would be the right word for me. Generally when you look at athletes, you see their muscles and all that stuff; I don't have any of that. My arm is just my arm -- it's not cut, it's not sculpted. I don't have traps bulging out to my ears; I have a neck. I don't have a six-pack. My legs are a little toned, but they aren't bulging out. I'm just dense. I think it's important to show that athletes come in all shapes and sizes.

I broke the female [American] record in 2013. I threw 75.73 meters, which is like 248 feet. There's been a huge jump [in the distances] recently, for sure. Women didn't start getting competitive on the world scene until the early 2000s; that was the first time it was in the Olympics for women. Before then, it was just men.

Hammer throw is essentially like a shot put on a wire. The hammer is about 4 kilos, or 8.8 pounds. You spin around three or four times, you let it go, and hopefully it goes far. 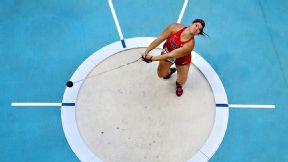 You just have to tape up your fingers and hope they don't fall off. You have all this weight just hanging on the edge of your fingers, and with the velocity coming around it, it just destroys your hands. I get manicures every two weeks on my ugly hands and I'm all apologetic: "I know my hands are disgusting. I throw stuff. I'm sorry."

I have a very strong core. For training, we do a lot of twisting motions because that's what our event mainly is: twisting. But I don't have a six-pack or anything else like that. I have, like, two rolls in the back, but I still think I'm pretty strong in my core.

The hammer is in control. You have to be long and loose. It has to be relaxed aggression. If you get pissed off at the hammer -- like I always do at every practice, because it just never goes the way it's supposed to -- you tense up. But if you tighten up, it shortens your muscles up and it just goes nowhere. Then you are even more pissed off.

If I want to throw far, I'll do a handstand. It gets my blood boiling. It gets the blood up to my head and it helps me get a little amped. We don't really have crowds when we compete, so you really have to get yourself going.

I'm so weak in my arms. I can't bench to save my life. I know it sounds really stupid when I say that. But for a thrower, I'm definitely on the smaller side and definitely not as strong as most of my competitors.

"I'll be honest, I like everything about my body." Amanda Bingson

I'm a protein junkie. I put protein in everything. [My coaches] want me to eat 175 grams of protein a day, which is a lot. And so I came up with all of these different ways to put protein in everything. It's unflavored, so I'll put a full scoop into my mashed potatoes and just mix it up. I put it in chicken salad, egg salad; I put it in my pasta. I just made spinach-and-artichoke dip and I put three scoops of protein in there.

I'll be honest, I like everything about my body. And I think it's because I moved from Las Vegas to Texas. In Vegas, I was bombarded with all of these "double zeros" and Abercrombie models, these little people coming in for shows. I never wanted to be a part of that, ever. And when I moved to Texas, everyone here is just so open about their bodies. I see these big girls in these tiny little bathing suits and I'm looking at them like, "Man, these girls are so confident!" Now I just think, "I'm just going to throw far because I'm confident with myself and I don't have to worry about what I look like anymore."

You might be prettier and skinnier than me, but I'll kick your ass in a game of one-on-one.

I first learned the word "fat" when I was in middle school. I never knew that I was the fat kid in school until a boy told me that I was too fat. I thought, "What does that mean?" I had always been so athletic and into sports; I didn't think I was that fat. But everybody wants to fit that skinny ideal picture that we see on billboards all the time, and people would always remind me that that wasn't me. So you just grow a thick skin. Like I said, I'll still whip your ass if we ever got into a fight.

I was a giant. I was definitely the tallest and biggest girl all the way through high school. In middle school, I was about 175. Throughout high school, I played around 175, all the way up to 200. When I got to college, I stayed at about 200 pounds. And now I fluctuate between 210 and 215. But I embrace it. I love myself.

I got kicked off my high school volleyball team because I was too fat. I had been playing volleyball since I was in elementary school, and I was pretty good at it. But my coach told me that unless I lost 30 pounds there was no room for me on the team. I couldn't lose the weight. I went with my mom to the doctor and we tried to learn all this stuff. I did everything I could and I could not lose it. So she kicked me off. There were other girls who were not as good as I was, but they fit into the uniforms. So that was her rationale. She said unless I lost 30 pounds then I couldn't be on the team, even though I was pretty good at volleyball.

I've seen two people get hit with the hammer. One of them was in the ICU for about three months with a collapsed lung. The other was my teammate. I actually hit my teammate and she walked away from it. But when it happened, I thought I'd killed her. It happened in my sophomore year in college and we were practicing at UNLV. She didn't think that I could throw that far, I guess.

If I medal in the upcoming Olympics, I'm just going to chug a beer. I'm going to get up on the podium and just go "Stone Cold" Steve Austin on it. I'm working on some things. Everyone will be looking at me like "trashy American." But at least we're still No. 1!