Olympic swimmer Natalie Coughlin spoke with reporter Morty Ain about her insane flexibility, ever-changing stroke, and what it was like to take it all off for the Body Issue.

I have scoliosis. It's a 27-degree curve, so when I get into the racing portion of the season, I have to be very careful. All the muscles along my spine, they lock down if they're not healthy. That's when I lose the ability to articulate my spine. It actually went undiagnosed for a long time. I was 30 when I finally got a doctor to X-ray me. I saw the image, and it took my breath away. I think because swimming is such a full-body exercise, my muscles developed and hid it. 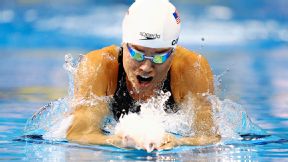 I was the first and only American to win six medals in all six events. [At the 2008 Beijing Games, Coughlin won one gold, two silver and three bronze medals, making her the only female U.S. Olympian to win six medals at one Games.] I wanted to drop an event and my coach was like, "Absolutely not, you're doing it!" I won a bronze medal in the 200 individual medley -- I didn't even train for that event. I swam it as a joke a couple of times earlier that year and ended up breaking the American record and really surprising myself.

My worst professional year just happened to coincide with the London Olympic Games. I didn't want to end my career on that note, so I decided to go for Rio.

I was turning 30 and married going into the 2012 Olympics, so everyone assumed I would retire, have babies and disappear. There are teammates on the male side that don't get those questions. I just find it interesting that people so openly are like, "Yeah, this is obviously what you're going to do, right?" Maybe eventually, in my own time. But I've taken really good care of my body to allow me to still compete at a very high level. And I really love competing; I love being an athlete. I'm just enjoying the ride.

My stroke is constantly evolving. I swim with a lot more power in the arms now. In the past, I rotated a lot throughout the body, and now I rotate more with my upper body to generate more power and speed. It's been quite the learning process.

One of my favorite things to do at the Olympic Village during the Games is people-watch. I love seeing differences in the body types. You can play a game of guess who is what, ya know? It's so funny to see who's a crew athlete versus a cross-country runner versus a swimmer versus a thrower.

"I was turning 30 and married going into the 2012 Olympics, so everyone assumed I would retire, have babies and disappear." Natalie Coughlin

Long arms are really important. I'm not sure what my inseam is, but my reach is 6-foot-1, even though I'm only 5-foot-8.

But I'm dwarfed by my competition. I don't look small when I'm in the water, but a lot of my competitors are easily over 6 feet. It's tough in shorter races when you are shorter.

I train with the men's team out at UC Berkeley. I'm one female amongst about 35 18- to 22-year-old men. But the team I trained with when I was a teenager was almost all male, so I definitely have the ability to hold my own, especially when it comes to talking trash.

I lift a lot more than I ever have. I lift four times a week. I can bench 70-pound dumbbells in each hand. I love that sensation of feeling so strong and powerful.

Bodysurfing is the most unusual training I do. The idea is to bodysurf just to have that contrast to swimming. In swimming, you're manipulating the water to move through it and generate speed; in bodysurfing, it's the exact opposite. As long as you have a basic understanding of how your body moves through water, you're making yourself into a better swimmer.

I can touch my toes with my elbows. I'm hyper flexible.

Swimming is one of the sports where a lot of people suffer from body image issues. There were a lot of girls around me growing up that suffered full-blown eating disorders, or just the body dysmorphia that every girl feels -- especially every girl in a swimsuit. There were times when I wasn't happy with my body, but I always knew that I was really fit and that it was what allowed me to be successful in the pool.

I'm self-conscious about my arms. It's really hard to find a dress that's a size 10 in the lats but a size 4 in the waist. But I want to be as successful as I can; if that means having big arms, I'll take big arms.

I've been really focused on the 100-meter freestyle. After the London Games I switched coaches, I switched my training routine, and I think it was the right decision for me. My goal is basically to earn some more medals and go out knowing that I made the changes that were necessary in my career.