ATHENS, Greece -- All those things the public struggles to see beyond -- the tattoos, the cornrows, crooked baseball caps -- could no longer be the excuse for missing out on his finest hour. These Olympic Games were the best of Allen Iverson, a performance people never wanted to believe possible for him. Maybe it was true he was once the unwilling pupil of Larry Brown, but his old 76ers coach should've been studying the lessons Iverson taught on selflessness and accountability in these games. 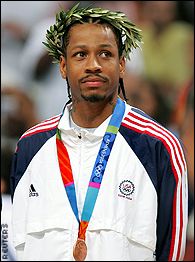 The most telling moment of all was in the minutes after the United States' loss to Argentina in the semifinals, when the possibility for gold and glory were gone. When the coach stayed on his self-serving course of blaming USA Basketball, his players and the officials, Iverson stayed with his message in these games: It was an honor to represent his country, and his team had an immense obligation to treat the bronze medal game as though it was playing for gold.

When Brown had come to give a concession speech for the Olympics, Iverson delivered a public pep talk to his teammates for the eventual 104-96 victory over Lithuania.

Nobody conducted himself better, nor behaved like a better representative of this basketball team than he did in the games. Maybe everyone believed Iverson needed to bring back a gold medal to use the Olympics to rehabilitate his image. They were wrong. There was far more virtue in defeat than victory here. America found out much more about Iverson without him winning the gold, than it ever would've with him winning it.

"It's an honor to be named to this team," Iverson said. "It's something that you should cherish for the rest of your life. And honestly, this is something that I will cherish even without winning a gold medal. I feel like a special basketball player to make it to a team like this."

When the United States needed a standup spokesman in these games, it was co-captain Iverson taking the tough questions for as long as people needed him, not co-captain Tim Duncan. He was never afraid to make himself front and center, even when the public unjustly wanted to make him the embodiment for the reasons they didn't like this team, and even rooted against it. They should've been here. They should've watched Iverson play, and listened to him talk, and understood his desire to represent the United States far exceeded his need for self-preservation. He was willing to expose himself to the hits, the way no one else did here.

Iverson was the co-captain of the United States Olympic team and understood the selfish and self-defeating consequences for constantly tearing this team down, the way Brown did, instead of trying to find a way to make this work. Everyone else had done enough analyzing of the flaws in the USA Basketball system, but there was a responsibility the coach and the captains had to deliver direction to this impossibly young team. What good did it do for the players to constantly hear Brown telling the world they didn't have enough time to prepare for the games, except to give those fragile psyches excuses for losing?

"We had to understand from the first day that was the amount of time we had to prepare," Iverson said. "Was it enough of time? I don't know. But we knew we had to get it done in that time.

"And that's not any excuse we could use."

When NBA commissioner David Stern had a chance to talk with reporters in Athens, he had two clear agendas: make sure people understood he loved the way his players handled themselves and make sure he let them know Brown had disappointed him. Brown never stopped doing it, and Iverson never started. Iverson had come to represent the United States, and representing it meant honoring his responsibilities to the end. It didn't mean trying to distance yourself from responsibility and blame, to protect your own legacy and reputation.

"Sometimes the historical ways to motivate a team don't necessarily play out quite as well when you're in an international setting," Stern said. "This was a team that was put together, by everyone, including the coaching staff. So, I don't buy the well, 'I'd like to have this, I'd like to have that.'

"It's not about who didn't come. You take your team to the gym and you play with what you got and then you either win or lose. This whining and this carping is not fair to [those] who are representing their country admirably and well."

On his way home, Iverson started recruiting teammates for 2008. He wants to come back again. He had the time of his life wearing the red, white and blue, and just hopes the United States will give itself its best chance for gold medal in Beijing.

"For as anybody who grew up in the U.S., and was able to be a basketball player in the NBA, you understand the things that your country has done for you and your family," he said. "It gave you an opportunity to be able to support your family and be recognized as a household name. It was just an honor to be able to do something like that, and I would advise anybody selected to a team like this to take that honor and cherish it.

"It shouldn't be a question in your mind. When you get a chance to represent your country, what's better than that?"

Maybe it's time everyone understands that even not winning a gold medal is better than that. And most of all, maybe it's time everyone takes a moment and looks past the cornrows and tattoos and bronze medal -- all the things they swore they never wanted to see on an Olympic basketball player -- and see what they believed they always did: one hell of a proud American.

Adrian Wojnarowski is a columnist for The (Bergen, N.J.) Record and a regular contributor to ESPN.com. He can be reached at ESPNWoj8@aol.com.