DENVER -- Few were happier to see the end of the Olympics
than Carmelo Anthony.

The Denver Nuggets star said being demoted to the bench for the
bronze medal-winning U.S. basketball team left him feeling alone,
and he spent many nights in Athens in his room, depressed and eager
to get home.

"I would play my (video) games, and hope and pray that it would
be over with," he told The Denver Post on Thursday. "I was in my
little funk. I didn't want to be involved with nobody."

Still, he said he would like to play in the 2008 Olympics.

"I got unfinished business to take care of," Anthony said.

The former Syracuse star said things started going wrong for him
in the first game, a 92-73 loss to Puerto Rico.

"I (showed poor body language) on the bench," he said. "After
that game, people were looking at me like I was selfish and I was
only thinking about myself."

In the week after the loss, Anthony said he met with coach Larry
Brown and left the meeting feeling they were on the same page. A
day later, however, Brown criticized Anthony to the media.

"He's not buying into what we're doing, he's having a hard time
accepting what we're trying to do," Brown said. "You can tell by
the way he acts, by the way he plays."

Anthony said he was stunned to read the comments and he never
spoke personally to Brown the rest of the Games.

"I thought everything was cool," he said. "(Then) I hear it
in the paper that I'm not on board and not going with what he wants
me to do. What do you want me to do?" 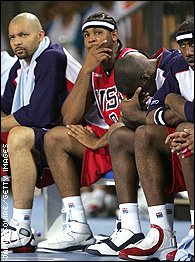 He said getting benched was a shock after being a high school
All-American, an NCAA champion with the Orangemen as a freshman and
a rookie standout with the Nuggets. He said he wishes he would have
handled the situation better.

"That would affect anybody," Anthony said. "I'm not saying
I'm the greatest player in the world, but I've never sat on
nobody's bench."

"I appreciate the sacrifice these guys made coming to the
Olympics," he said. "We didn't have time to prepare. The team was
put together in the last minute. When a lot of guys didn't want to
go, those guys did and I'm proud of that."

Anthony acknowledged he respects Brown, whose Detroit Pistons
won the NBA title this year. But he said the U.S. team would have
done better if the players played more loose.

"He still makes mistakes," he said. "We weren't the Detroit
Pistons. We didn't have 90 games to play together. We had two
weeks."

As for the bronze, Anthony said it was tough.