ATHENS, Greece -- Hand it to Bela Karolyi. Before the Olympics, he called the U.S. gymnastics team the best in the world, and there he was, a handful of mistakes and a silver medal later, sticking to his story. 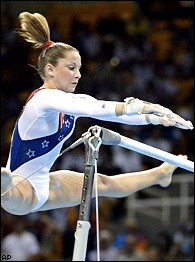 "They are the best team in the world," insisted Karoyli, a chief architect of Team USA. "They delivered the best of what they could deliver tonight.

"No country in the world has the power and the numbers and the talent that we are heading for. And this is what makes me so proud. I'm telling you -- but you don't have to believe me, you're going to see it -- next time there's going to be a different story. I guarantee."

If returning to the medal podium after a disappointing fourth-place finish in Sydney four years ago and setting the stage for the future were the sole objectives of these Games, then there was certainly reason to be happy. But the best of what they could deliver?

Not everyone felt that way.

"I think we all have had better days in competition," Carly Patterson said. "We all had our little mistakes. It happens. It's already done and we can't change it."

If the Americans were going to win gold, they needed to separate themselves from the competition, especially Romania, as much as possible on their strongest event -- the uneven bars. Instead, their margin of victory over Spain -- yes, Spain -- was little more than one-tenth of a point.

Patterson, who got off to a poor start with a 9.325 on the vault, registered a 9.287 after turning a small error on the high bar into a bigger one by trying to wing it. Karolyi called it a "childish mistake."

With a four-tenths of a point lead over Romania, the United States was forced to use Plan B when Courtney Kupets pulled herself out of the beam rotation because of a lingering injury to her right hamstring. Mohini Bhardwaj, who had been practicing since Kupets' leg started bothering her the day before, under-rotated a punch front and couldn't convert it into a back one-handed handspring. The omission dropped her score to a 9.325. The U.S. finished third in the event and dropped to third place overall, 12 one-hundreths of a point behind Russia.

The decision to leave Kupets in the floor exercise competition was called into question after she lost her balance on a standing double-turn and was unable correct it with a bonus move. Kupets received a 9.187 for the routine, the Americans' lowest score of the competition but maintained that the mistake wasn't related to the injury.

"It was nothing I couldn't deal with," she said.

The Americans, however, had to deal with the score because under the rules of this Olympics all scores are kept. In the past, only five scores counted, and the lowest was thrown out. There no longer is a margin for error.

The United States regained second place but was forced to sit on the sidelines and watch as Romania nailed three solid floor routines, capped by Catalina Ponor's 9.750, the highest score of the night.

The Romanians celebrated, the Americans smiled and the bronze-winning Russians joined in for the hugs and kisses that were being passed around.

Karolyi showed a hint of resignation while greeting his wife, Martha, the team's coordinator, after the meet.

"It was a courageous performance," Karolyi told his wife. "There is nothing to be ashamed of."

Then Karolyi returned to extolling the virtues of USA Gymnastics as he sees it. After the Sydney Olympics, Karolyi and his wife persuaded the organization to centralize its elite program at his ranch outside of Houston in order to bring the gymnasts and their coaches together regularly to train under one roof. The move drew the ire of critics, but the Karolyis took the heat, convinced that uniting the team while at the same time giving the gymnasts a more normal life with their parents, friends, and even homework, was the way to go.

"The pain and the sorrow in forming the program," Karolyi said, "now is the payoff."