ATHENS, Greece -- Hamm? No, Hamm was out of it. Everyone knew.

The American had just taken his chance at a gold medal and tossed it like a stone into the Mediterranean, stumbling off the vault like a man stepping on his own shoe lace, nearly falling onto the judges' table the way basketball players do when trying to save a loose ball. His hopes were hopeless.

Sure, Paul Hamm had pulled an Elway before, coming back from a separated shoulder last year to win the World Championships, but it couldn't happen this time. Not again. No way. 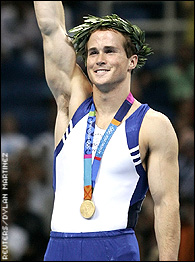 Was this the way a winner looks? No, Hamm more resembled a teenager waiting to get his braces on, breathing heavy and nearly shaking. He was pale and cotton mouthed and spinning. Plus, why bet on a guy who was counting himself out?

The gold? Try everything.

He started so strong, so much like the guy who was being hyped as the best U.S. male gymnast ever. He started on the floor routine, nailing a 9.725. Did the pommel horse next and twisted off a 9.700. Hopped over to the rings and pealed off a 9.587. After three events, he was in first place with 29.012 points, and was cruising toward a gold medal, a Wheaties box, and a life of first class, tables at the window and free drinks. It was that easy.

Then, he rushed down the runway toward the vault, and flew off it like he'd made trips to BALCO. Way too powerful, way too fast, he twisted and landed on the mat, falling forward, then peeled off to the right and nearly bellyflopped onto the judges' table, good for a sorry 9.137. He didn't even salute them on the way off or wave to the crowd. He took his seat on the bench and glared.

Said American gymnast Brett McClure: "I saw that, and yeah, I thought he was done."

He wasn't alone. Americans in the crowd started packing up their flags. Journalists started dreaming up leads detailing how the American men gymnastics program was getting closer to catching up with the rest of the world, but was still more Bon Jovi than Bruce Springsteen.

Hamm would forever be a good gymnast whose claim to fame was no matter how many events he'd participate in, announcers would always pronounce his name Ham, like the food, instead of Hamm, as in mom.

Hamm just sat frozen. He'd done everything on Wednesday to keep from this sort of night. He and McClure, the other men's all-around qualifier, spent the whole day together, waking up at 8, breakfast at 8:45, to the gym for light stretching at 10:30, a light snack, then a few hours of Texas Hold 'Em, which seems to be the Official Game of America's Male Olympians.

He cruised to the Olympic arena, his iPod plugged into his ears. A few hours later, after his sneeze on the vault, he went from first place to 12th with only two events left. It was a huge choke. Somewhere, Scott Norwood looked up Hamm's phone number in Milwaukee for consolation.

But then something curious happened: Hamm stepped up to the parallel bars, jostled and spun, landed as softly as if he'd jumped off a curb, and pumped his fist in the air.

"I thought I'd gotten myself back," he said.

The judges agreed, giving him a 9.837. Suddenly he was in fourth place. Nervy.

But surely it was going to end with the next event, the horizontal bar, Hamm's worst and one that he botched in the team finals two days earlier. He needed an absurd 9.825 score to tie for the gold.

This is like asking Shaq to hit 10 straight free throws.

But then something wonderful happened. He shot on the bar, and floated and rotated as if governed by something else than the gravity. His toughest move came up -- three blind releases in a row -- and he not only pulled it off but also pulled it off with perfect form. He sprung into the air for his dismount, folding himself like a baton, then unfolding just in time to land square and steady. He threw his arms into the air.

He had moved up 12 spots in two events, in his worst apparatuses, and became the first American to gold in the all-around since ...

Experts were trying to explain the inexplicable. In the tiny gymnastics world, which most Americans only care about every four years, Hamm had done what Elway did to Cleveland, what Jordan did to Utah, what Brady did to Carolina.

"I've never seen anything like this," said broadcaster Peter Vidmar, the only other American man to even medal in the all-around. "Ever."

Two Koreans, Dae Eun Kim and Tae Young Yang, looked like the best man who lost the engagement ring. Kim frowned as his silver was placed around his neck. Yang took off his bronze right after leaving the floor. Both blew past Korean press begging for a quote.

Hamm, meanwhile, had a grin that won't get a day off for a while. What can you expect from Hamm? He'll do the Today Show. He'll do Letterman and Leno. He'll do commercials. As one of People's 50 Most Beautiful People, he's got a good running start.

Now all he has to deal with is you-know-what. When he walked off the floor, his medal shining even more brilliantly that you can imagine, a radio guy interviewed Hamm and then turned the microphone back to himself for a wrap-up.

Maybe by Beijing in 2008 everyone will get the defending gold medalist's name right.

Seth Wickersham covers the Olympics for ESPN The Magazine. E-mail him at seth.Wickersham@espn3.com