ATHENS, Greece -- Short and pudgy, he leaned in and yelled "Hey, Courtney!" as she and her U.S. women's teammates entered the arena on Tuesday night. She didn't hear her dad, didn't look up, didn't smile. But it was easy to spot which one was her. The one with her jumpsuit on. The one not warming up. The one not sweating. The only one. 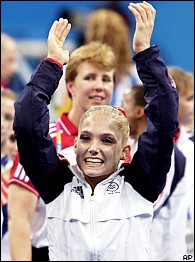 Mike McCool, his lip quivering, took a deep breath, then choked up, as he'd done a lot the past two days. He knew the next three hours weren't going to be easy.

His baby girl had been crying the past two days, ever since she learned that she would be the only U.S. gymnast not competing. She was benched after a lousy performance in Sunday's qualifier, when she almost fell off the balance beam and stepped out of bounds with both feet on the floor routine. She held herself together for a few minutes after, but then the U.S. team's youngest member, at 16, lost it. Her dream was over.

Suddenly, life seemed to stop. Back home in Kansas City, Mo., friends and family had rented a huge TV to see Courtney compete. Now, the air was robbed from their lungs. Over $25,000 had been raised so that Mike, his ex-wife, Linda, and their two other kids Mike Jr. and Morgan could come to Athens. Now, they were fighting emotions telling them it was all for nothing.

Mike and Linda tried to be strong. The talked to Courtney for a moment on Monday and bit their lip as she bawled over the phone. They didn't want Courtney to see them cry, to hear them cry. Everything was held in. That was what they were going to do for their daughter. "If we start crying," Mike said, "then she's going to feel worse."

The McCools were used to making sure that none of their problems ever hampered their first daughter. Two years ago, on the day of one of Courtney's meets, Mike had a heart attack. Another followed days later. Within a week he'd had bypass surgery. Soon after, his marriage began to fray. He grew depressed. He was diagnosed with diabetes and bi-polar disorder. He had made a good living as an architect in Missouri, but medical bills and Courtney's Olympic dreams ate into his savings.

Courtney flipped and twirled into one of the country's best gymnasts, and the costs went north of $100,000. Mike tightened his belt and kept writing the checks, working 70-hour weeks. The girls stayed with Linda, and he didn't see them much. "Things have gotten different with the girls and me," he says. "We're not as close. It's hard." He swallowed, then clarified. "It's lonely."

This year, as Athens crept up, Courtney's career seemed to pull everyone together, even if Mike's health was deteriorating. At both the Nationals in Nashville, Tenn., and the U.S. trials in June, he passed out in his hotel room because of complications with his insulin. Paramedics saved his life twice. He didn't want his baby worried, so he didn't tell her. He still hasn't.

The Olympics brightened everyone up. Mike sent e-mails to his friends, saying, "Ten days and counting," to "One week and counting!" finally to "We're leaving tomorrow." He showed up in Athens as a walking middle finger to how officials warned Americans not to dress: white hat, red shirt, blue shorts, wrapped in a backpack and fanny pack, with his chest a blanket of Olympic pins, shouting to everyone with ears that he was the proud daddy of one of the country's to-be sweethearts.

But then the qualifiers happened. A near-fall off the beam happened. Two feet out of bounds happened. Courtney's benching happened. Mike read out loud from USA Today what happened: "McCool faltered Sunday in her two strongest events, floor and beam." He started tearing, then caught himself. "Ouch," he said. "That hurts."

Worst part was, the McCools couldn't talk to Courtney. The Olympic coaches don't let them talk on the phone except at weird hours. They couldn't hug Courtney. In fact, the only time they've seen her is from the stands when she's on the arena floor. The McCools were told that because Courtney was only an alternate, they would not receive complimentary tickets to Tuesday's team finals. Luckily someone came through with freebies and they got in.

So when 9 p.m. rolled around, and Courtney came into the arena wearing jersey No. 415, Mike screamed. As Courtney watched the other girls live out her dream, she was the first one to give a hug and the last one to stop clapping. Mike usually wore an orange ribbon at meets -- it's Courtney's favorite color -- but not this one. "God bless her," he said. "She just doesn't look happy. I can tell."

He spent those three hours fidgeting. Starting chants of "U-S-A!" Taking deep breaths. Taking pins off his shirt and putting them on a new souvenir hat. "I gotta do this to keep my mind off this," he said. "Otherwise it just breaks my heart."

During a lull, he screamed for Courtney, who 40 rows and half the arena away, heard him and smiled. When the United States finished its last event, hurt by a low score of 9.187 on the floor by Courtney Kupets, Mike wondered. "I think Kupets' leg is still hurt," he said. "My baby would have done better." As it turns out, Kupets leg was still hurt. His baby probably would have done better.

So much is made of these tiny stars, who trade boyfriends and height and cheeseburgers and homecoming for one chance. No one was a bigger long shot than Courtney McCool, who was by far the youngest on the team and had only five big meets under her belt. There might be more medals for the U.S. team, maybe even a gold or two, and you'll hear the sacrifices that the winners made. But the Olympics are over for Courtney McCool, over for her family, who didn't give up any less than the women who might make a Wheaties cover. It's easy for a family to show joy, but it's a lot harder to stuff the pain just so their daughter feels it a little less.

As the Americans lined up to be awarded their silver medal, Mike broke out his Panasonic video camera, and like the good dad, started filming. As Courtney bowed to take her medal, her name was announced. Mike, scrunched in his seat, camera at his face, his voice cracking, whispered, "That's my little girl."

Just then, tears rolled down his cheeks.

And you get the sense Courtney just knew.

Seth Wickersham covers the Olympics for ESPN The Magazine. E-mail him at seth.wickersham@espn3.com.