ATHENS, Greece -- The 20-year wait is over. America has its
new Mary Lou, and her name is Carly Patterson. 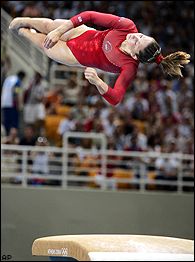 The 16-year-old dynamo from Baton Rouge beat Russian superstar Svetlana Khorkina
to give the United States another Olympic all-around champion
Thursday night, closing with a dazzling routine on the floor to win
gymnastics' premier event.

"It just means a whole lot," Patterson said. "I worked my
whole life to be an Olympic champion."

She wasn't the only one who'd been waiting for this night.

Patterson, of Allen, Texas, is the first U.S. woman to win the
all-around title since Mary Lou Retton did it in 1984, and no one
was happier about it than America's first golden girl.

"I have been waiting 20 years. Do you hear me? I have been
waiting for 20 years," Retton said in a telephone interview from
the States. "The crown has been sitting and waiting for the next
all-around champion. Carly Patterson, it's yours."

Patterson's victory came the night after Paul Hamm won gold in
the men's all-around on the same floor. The two make the United
States only the second country to have both all-around champions in
the same Olympics, joining the former Soviet Union and its
successor, the Unified Team.

On a riveting evening that came down to the very last tumbling
pass, Patterson scored a 9.712 on floor to finish with 38.387
points and defeat Khorkina by .176. Zhang Nan of China won bronze.

When he saw the result, Retton's old coach, Bela Karolyi, jumped
for joy and hugged his friends, happy to finally see a champion
replace the one he coached at the Los Angeles Games.

"Strong. Sturdy. Just like we expected. It's great. She was
beautiful," Karolyi said, before taking the phone to talk to
Retton. "It took 20 years. But finally."

Khorkina, competing at her last Olympics, will never know that
joy.

The Russian diva, who for years called herself the "Queen of
Gymnastics," still took the Olympic all-around medal that had
eluded her during an entertaining and wildly successful career. It
was silver, not gold, although listening to her talk, no one would
have known the difference.

When it was over, she acted like a champion, running a victory
lap, grabbing the Russian flag and taking it to the uneven bars,
where she showed it off and dragged it across the lower bar. On
Sunday, the 25-year-old Khorkina will go for her third Olympic gold
in the uneven bars and her 12th overall in world and Olympic
competition.

Patterson isn't nearly the showwoman. Nor is she as graceful a
ballerina as Khorkina. But she's more athletic, more explosive, and
on this night, she was just a little bit better.

"She's a very good gymnast with a very good coach," Khorkina
said. "I wish her to last as long as I have at the Olympic Games,
and proudly to carry the title of Olympic champion."

Like Khorkina, Patterson closed the night on the floor. On all
four tumbling passes, she jumped higher than any of the other 23
women in the meet. Just as importantly, she pulled off perfect
landings that almost always make the difference between first and
second place.

Compare that to Khorkina, who was graceful and elegant in every
sense, but stumbled ever so slightly during one pirouette and
didn't have the burst off the mat to go with her trademark
flamboyance.

When Patterson's winning score was posted, coach Evgeny
Marchenko lifted her on his left shoulder and paraded her in front
of the fans -- a champion's chariot for a championship effort.

"I don't even know what to say right now," Patterson said.
"You dream about this your whole life. Then you win the gold
medal. It's just amazing."

The other American in the competition, Courtney Kupets,
struggled all night and finished ninth.

Last year at world championships, it was Khorkina edging out
Patterson.

Two moments stood out then: Khorkina leaving the floor and
admitting she was uninterested while Patterson was performing the
decisive routine on vault. Then, at the medalists' news conference,
Patterson stepping onto the podium to be greeted by Khorkina, who
started flipping through a magazine to show the American her latest
modeling pictures.

An arrogant insult? Maybe so.

"I just thought, 'Whatever?''' Patterson said last month.
"I'll go out and do my gymnastics and the best person will win."

She did just that.

During the medals ceremony, Patterson sang along to "The
Star-Spangled Banner," played at the arena for the second straight
night, and she looked to be blinking back tears.

Khorkina, meanwhile, stared at the scoreboard and smiled at the
fans, most of whom had come to see her.

As she closed her night dancing to "Acropolis Adieu," there
was a sense that this was her time, and her arena.

Once the music started, Khorkina was sexy, seductive, beautiful.
Her tumbling passes were graceful and fluid, not the work of a pure
jock but of a ballerina who simply works the jumps into the bigger
show.

But there were mistakes. Often in the past, they have been
overlooked, a bow to a star who at times has seemed bigger than the
sport. But when the score, a 9.562. popped up, Khorkina nodded
knowingly.

She had left the door open, and Patterson took advantage.

Waiting for the start signal, Marchenko gave her a thumbs-up and
she nodded back. The highlights of her routine had little to do
with dance, and lots to do with jumping.

On her third tumbling pass, she did two somersaults, and when
they were complete, she was still hanging high enough that she
could look down and pick the exact spot she wanted to land. She
landed perfectly -- on all four passes, and that was the difference
between first and second.

"I just knew I had to stick a good floor routine," Patterson
said. "After my last pass, I knew it.''

Khorkina's best event is uneven bars, and two rotations earlier,
she scored a 9.725. Patterson answered with a 9.575, a much better
effort than in team finals, when she got caught up during one of
her spins and lost precious tenths of points that made the
difference in America's silver-medal showing against Romania.

Two nights later, though, Patterson got her gold, and Americans
found a new gymnastics star.