ATHENS, Greece -- The Israeli national anthem sounded over
an Olympic podium Wednesday for the first time in the Jewish
state's 56-year history after a young man whose father named him
for the sea took the gold medal in windsurfing. 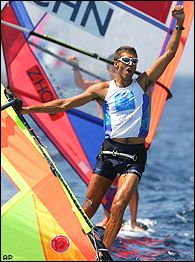 As the last notes sounded, exuberant Israelis mobbed the podium,
embracing Gal Fridman and snapping photographs of the gold medal
draped around his neck. Frantic security officials were unable to
hold them back.

"Every Olympics we dream of hearing the anthem and seeing the
flag. It's the top," Fridman said, the victor's wreath on his
head. "I was feeling very proud and so happy to hear the people
singing it. I sang as strong as I could, but nobody heard it
because everybody was screaming."

Israel entered the games in 1952, but its Olympic history is
marked more by terrorist attacks and political demonstrations than
by sports achievements and medals. At the 1972 Munich games, 11
athletes and coaches were killed by Palestinian terrorists.

Fridman's win provided a more positive Olympic image: that of a
winner. He secured the gold with a second-place finish in
Wednesday's decisive race, giving him the best overall performance
in the 11-stage competition.

Nikolaos Kaklamanakis, the Greek who lit the Olympic flame
during the games' opening ceremony, took the silver and Briton Nick
Dempsey took the bronze.

Israel erupted in celebration, desperate for good news after
four years of bloodshed. Israeli President Moshe Katsav called to
offer congratulations and invite Fridman for a visit, saying he
wanted to give him a hug. Prime Minister Ariel Sharon called as
well.

Fridman promised to take his gold medal to the memorial in Tel
Aviv for those killed in Munich, to "give respect for the people
who were in front of me and killed while they tried to represent my
country."

Gal Fridman began sailing at age 7, and soon his father was
coaching him. He entered his first competition when he was only 11,
and won a bronze medal at the 1996 Olympics in Atlanta.

But even for Fridman's father and former coach, the gold-medal
win felt unreal.

"It's very, very hard to believe that he succeeded in doing
this," said Uri Fridman, who watched Wednesday's race from the
Fridman family house in central Israel. Soon after the finish, it
was filled with cheering friends and relatives.

Yaron Micaeli, spokesman for the Israeli delegation in Athens,
said more organized celebrations would wait until Fridman returns
home. But it was clear he was ecstatic.

"We have a gold medal," Micaeli said. "What can be more than
that?"

Fridman celebrated his win with a victory dip in the Saronic
Gulf before wrapping himself in a blue-and-white Israeli flag. At
the medals ceremony, fans waved Israeli flags and chanted: "Israel
ole ole!" when he walked in, wraparound sunglasses perched atop
his head.

Fans hugged one another as Fridman held his medal high, and sang
along with him as the national anthem was played.

"It's like the best thing that could happen," said Eli
Moskowitz, a 28-year-old gym teacher who traveled from Rehovot,
Israel, to see the race. "In Israel we don't have so many moments
like this. Any reason is a good reason for celebration."

Israel won its first medal in 1992, and had won one silver and
three bronzes -- including Fridman's -- before coming to Athens. It
won another bronze in judo last week.

Two other members of Fridman's sailing club had a chance to win
a medal in doubles at Seoul in 1988, ranking second heading into
the final day of competition. But they didn't compete because it
was Yom Kippur, the most holy day of the year for Jews.

A Palestinian delegation is in Athens under its own flag. A
swimmer and a runner competed, but both finished last in their
qualifying rounds. The war has complicated travel, depleted funds
and destroyed training facilities, making it difficult for them to
train.

"The true value of a country is measured not by the number or
the color of its Olympic medals," said Mustafa el-Ajouz, spokesman
for the Palestinian Embassy in Athens. "It is measured by its
respect and adherence to the Olympic and human ideals of
brotherhood, equality, friendship and peace."

Fridman said he wasn't a fan of politics, but that he hoped that
his achievement could help bring peace to the country.

"I want ... that the fight stop in the water," he said. "If
you want to fight someone, fight him in sports and see who is
better."