ATHENS, Greece -- On a chilly day last October, the U.S.
softball team met its match and took a beating like never before --
or since. There was no "mercy rule" to save them. 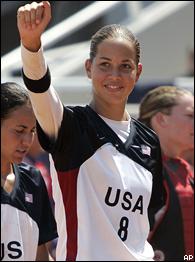 The Navy SEALS don't believe in one.

To prepare for the Olympics, the Americans trained with the
elite unit in San Diego, running their obstacle courses and
enduring tests of mind and body. They learned teamwork and a new
motto: So what.

On Friday, after posting their seventh straight shutout, 3-0
over Taiwan to finish a sweep through preliminary-round play, the
two-time defending gold medalists had one but one thought.

"So what," Lisa Fernandez said.

Cat Osterman struck out 10 in six innings and Crystl Bustos
homered for a U.S. team (7-0) that's as hot as the Athenian
sunshine.

Showing more speed, more pitching, more everything than any team
in the field over the last week, the Americans set a few records in
preparation for Sunday's semifinal showdown with Australia, their
old Olympic nemesis.

The Americans are dominating in a way never seen before. Through
seven games, they've outscored opponents 41-0, allowed just 11
hits, permitted three runners to reach third and compiled a .346
batting average to just .080 for the opposition.

Fernandez, a two-time Olympian, is having trouble digesting some
of the numbers.

"It's mind-boggling when you look at our ERA," she said of the
U.S. team's seven-game goose egg.

And there's even more.

Fernandez, who batted .097 (3-for-31) in Sydney four years ago,
is hitting .556 -- an Olympic record, since games played after the
opening round don't count. And Natasha Watley, whose speed may be
the U.S. team's best weapon, has five steals -- another record -- and
seven infield hits.

Oh yeah, and there's the Americans' 77-game winning streak -- not
a record but not bad.

The accomplishments, though, won't mean a thing if the U.S. team
can't win two more games and a gold medal.

"It's not how you start," Fernandez said. "It's how you
finish."

Having cruised and crushed their way through round-robin play
untested, except for an extra-inning win over Japan, the U.S. will
now face the Aussies, the only team to beat the Americans twice in
the Olympics.

And the pitcher who got both wins -- Tanya Harding -- will start.

"I'm kind of thinking she might be on the mound," said U.S.
coach Mike Candrea, who will go with either Jennie Finch or
Fernandez.

Fernandez is campaigning for the ball.

"I want to start every day," she said.

The Aussies (6-1) were routed 10-0 by the U.S. last Sunday.
They've clinched a bronze medal, but they've got two of those
already. They want vengeance and a gold.

"Sunday is going to be totally different than the ball game you
saw the other day," Harding warned.

It was more of the same Friday for the United States, but Taiwan
deserves some credit. The Taiwanese (2-3) nearly scored, got three
hits -- two in the seventh off Lori Harrigan -- and became just the
third team to go the seven-inning distance with the Americans.

Taiwan loaded the bases in the third, but Osterman, the
21-year-old with wicked stuff, escaped the jam with a strikeout. In
the seventh, Amanda Freed made a diving catch in the gap, jumped up
and threw to first to double the runner off.

The play showed athleticism, guts and smarts. Had it gotten past
her, Taiwan could have scored.

And now, they want to finish what they started. In the sea and
sand, the SEALS taught them well.

"Nothing is going to stop this team," Fernandez said.
"Whether it's win or the heat or whatever, our response is going
to be, 'So what."'

It's been the perfect one so far.