ATHENS, Greece -- One last time, the U.S. softball team
crowded around its coach and listened. 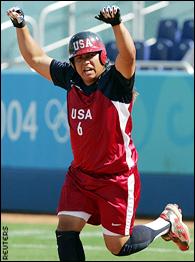 Two hours after winning their third straight gold medal and
posing for pictures, the Americans pulled tightly together, stuck
their hands into the middle of the circle and waited for coach Mike
Candrea to ask them a question they've heard every day for more
than a year.

Loud enough for the whole world to hear.

On Monday, the U.S. team completed an almost flawless romp
through the Olympics, winning gold with a 5-1 victory over
Australia -- another dominant performance by the best softball team
America has ever built.

"This team got it done, and we got it done in grand fashion,''
said pitcher Lisa Fernandez. "This is the best that's ever put on
the red, white and blue.''

They leave the Olympics with gold medals for the third straight
time and a lasting legacy only slightly off perfection. The U.S.
softball team not only was the real American Dream Team of these
Olympics, it was the most dominant team of the Athens Games -- and
maybe any other.

"This is the best one I've ever coached,'' Candrea said. "It's
probably the best team I'll ever see. I think it will go down as a
team people will talk about for a long time.''

Displaying unmatched power on the mound, around the basepaths
and in the batter's box, the United States beat Australia for the
third time in eight days, capping a tournament it made its own.

Fernandez pitched a four-hitter and Crystl Bustos hit two homers
-- one a monstrous shot off Aussie ace Tanya Harding -- to finish off
their stay in Greece with style.

They ending was perfect except for one minor flaw: The Aussies
scored a run in the sixth inning.

"That was our mini-goal,'' said outfielder Sandra Allen.

The Aussies knew better than to go for gold. Fernandez wasn't
going to let them get their hands near it.

"We didn't do our homework well enough,'' Stacey Porter said.
"She got us in the end again.'' 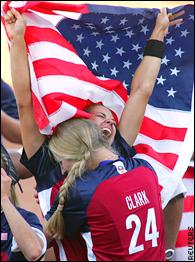 No worries, mate. Fernandez gets everyone.

At 33, the three-time Olympian only seems to get better. She
went 4-0 in the tournament and batted .545 in her third games,
leaving little doubt that she's still the game's best all-around
player.

The best team was never a debate.

The one run Australia scored was the only one against the
Americans in the tournament, a tiny flaw that made the final score:
U.S. 51, World 1.

The Americans outhit, outran and outclassed the game's top teams
while virtually rewriting the Olympic softball record book for
runs, home runs, ERA, extra-base hits, this, that and the other.

From their opening-game rout of Italy, to their gut-wrenching
extra-inning win over Japan, to their third win over the Aussies,
the Americans showed that -- at least in the softball world -- they
are alone on the diamond.

"This is the greatest feeling in the world,'' outfielder Kelly
Kretschman said. "We made it look easy, but every game was
tough.''

Women's softball has never been played better, at least not
since it became an Olympic sport in 1996. However, it's guaranteed
a spot in the lineup only through the 2008 Beijing Games.

"Softball is dominated by the U.S.A.,'' said catcher Stacey
Nuveman, who homered. "And that's just the way it is.''

These women were a special unit, indeed, not just as a team but
as a group united by a common goal and even more so by last month's
death of Candrea's wife, Sue.

Candrea drew courage from his players during the toughest time
of his life, and seconds after his team -- the one as close to
perfect as a team can get -- won their medals, America's newest
golden girls were there for him again.

They hugged their coach. They cried in his arms. They hoisted
him in the air to chants of "U-S-A! U-S-A!''

"I thanked them all for the greatest moment of my life,'' he
said. "I will never forget the ride they put me on in these
Olympic Games.''

Nor will anyone forget this team -- one that extended its winning
streak to 79 games.

Four years ago in Sydney, the United States barely captured
gold. This time, it was just a blink from perfection.

Fernandez, as always, led the way.

The right-hander was thrilled when Candrea, who could have
started Jennie Finch, gave her the ball against the Aussies -- the
closest thing the U.S. team has to a rival.

She didn't let him down. And she won it for his wife as much as
she did for her teammates.

"The only way I could help him get through it was to at least
bring home the gold,'' Fernandez said, her voice cracking.

As she spoke, Candrea covered his face.

During the game, he rubbed his wedding band. It reminded him of
the only thing missing from the greatest day of my life.''

When he was chosen coach two years ago, Candrea issued a
challenge to his players: