No Olympic athlete ever has won more medals in a single Games than Michael Phelps. Phelps won more swimming medals than 17 countries. And he will only get better. 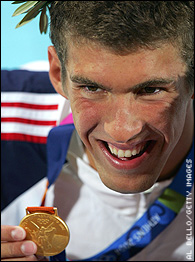 At the dining hall where the Olympians chow, athletes from other sports have crowded around televisions to watch Phelps swim. Chinese swimmers came up to Phelps throughout Saturday night's races and asked for his autograph. And for a picture. These aren't fans -- they're fellow Olympians. That's the reputation Phelps has built in only a few days among the world's greatest athletes. And he will only get better.

Phelps swam roughly 70,000 meters over the past eight days. That's around 40 miles. Didn't Philippides die after running only 26 miles? Didn't they name an event after him? No such luck for Phelps. Nobody else can swim 70,000 meters in a week and then giggle and say, "It's McDonald's time!" Fellow American Erik Vendt, who won silver earlier in the week, says he needs two or three days to recover from his races. And he only swims 400 meters.

And he will only get better.

How? How can he improve on best-ever? Start with this incredible fact: Phelps doesn't lift weights. Never has, really. Ian Crocker became the world record holder in the 100 butterfly thanks to an intense resistance program. Phelps beat Crocker in his best event without any of that. "The thing with Michael compared to Ian and Brendan [Hansen]," Phelps' coach, Bob Bowman, says "is that he's not as strong as they are. He's not as explosive."

Not as explosive? Then imagine what will happen when Bowman joins forces with Bowflex. Well, don't imagine. Here's what will happen: Phelps will get faster. Bowman hates to make predictions, but he thinks Phelps can cut some of his records by seconds. Not hundredths, or tenths -- whole seconds.

Then there's the breaststroke. Never mind that Phelps set a world record in the 400 individual medley and won the 200 medley in part because of his breaststroke. Bowman called that aspect of Phelps' performance "disappointing." Um, okay.

So the coach will tear Phelps' breaststroke apart and start over. He'll overhaul Phelps' kick. He'll work out a few more kinks. This is like working with Barry Bonds on his bunting, but why not? Why not make Phelps swimming's ultimate five-tool athlete?

What else? How about some different events? Bowman kinda sorta wanted Phelps to swim the 200 backstroke instead of the 200 freestyle. Look for that in 2008. And if he's going for the 200 back, why not add the 100 back? New world record holder Aaron Peirsol will offer some tough competition -- Peirsol beat Phelps in the 200 back at U.S. trials -- but so did Crocker in the 100 butterfly. We all saw what happened in that race.

(Phelps also told his coach he wanted to try the 50 freestyle, but Bowman wants to hold off on that one until, say, 2012.)

Then of course there's maturity. Phelps owned these Games, but he also seemed tired and overwhelmed at times. He seemed, well, 19. In four years, he'll know exactly what to expect. Remember what Mark Spitz did in his second Games. Those took place in 1972.

Phelps will move to Michigan, where he will take classes starting in January and work more smoothly with Bowman than he has over the past four years. There have been times when Bowman and Phelps got into screaming matches. As recently as December, Phelps got out of the pool and yelled at Bowman, "Nothing is good enough for you!" There have been other times when Bowman hinted Phelps should maybe reconsider swimming. "Our relationship is much better than it was," Bowman says. "I was so dictatorial. I don't have to use the hammer very often anymore."

And one other thing: Phelps might not be done growing. The giant won the 100 butterfly on the length of his torso. That torso might get longer still.

America's only single Olympics eight-medal winner summed up his Games simply: "I wanted to become the first Michael Phelps."

Anyone else excited to see the second?