ATHENS, Greece -- Aaron Peirsol waved his arms in disbelief,
then ran the race through his mind, trying to figure out what he
did wrong. 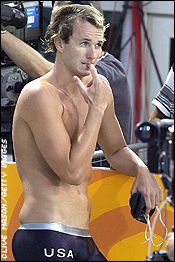 The most dominant backstroker in the world had somehow made a
mistake that cost him a sure gold medal.

On a night Americans dominated at the Olympic pool, Peirsol's
disputed victory in the 200-meter backstroke was the most memorable
-- and convoluted. First, he was disqualified for making an illegal
turn. Then, his win was restored, just in time for him to have the
gold draped around his neck.

Hours after he took a triumphant lap around the deck, swimming
officials were still debating the whole mess.

Finally, the word came down: Peirsol's victory would stand.

No one disputed another victory by Michael Phelps, who secured
his legacy as one of the greatest swimmers in Olympic history by
winning his fourth gold medal Thursday.

For good measure, Amanda Beard captured the first individual
gold of her illustrious career, in the 200-meter breaststroke. Only
a victory by Australian Jodie Henry in the women's 100-meter
freestyle prevented an American sweep.

Peirsol cruised to an easy win in his signature event -- he
hasn't lost in almost four years -- but was shockingly DQed. About a
half-hour later, the decision was overturned and he walked out to
receive his second gold medal.

"Man, it was a rollercoaster," said Peirsol, who earlier won
the 100 backstroke. "I feel bad for everybody in that field. It
was a weird call. I'm happy it was overturned, though."

Austria's Marcus Rogan, who finished more than two seconds
behind Peirsol, was briefly feted as the gold medalist. When the
decision was changed, he didn't seem too upset about settling for
silver.

"Aaron is a very honest person. I am sure he swam fairly,"
said Rogan, a close friend of the American. "For a moment, I
thought about gold and the idea was just beautiful but, after all,
it's fair like this."

But the Austrians protested the ruling, as did Britain after its
swimmer, James Goddard, was bumped from third to fourth. About 2½
hours after the race, FINA rejected the appeal, giving the bronze
to Romania's Razvan Florea.

According to American assistant coach Dave Salo, the judge in
Peirsol's lane apparently applied an old rule that involves kicking
going into the wall. The sport's governing body announced that the
judge did not adequately explain the alleged violation "in the
working language of FINA" - English or French.

Peirsol was baffled by the whole ordeal.

"I tried to remember what I had done wrong," he said.

The world record-holder led most of the race and easily beat
Rogan in 1:54.95. Peirsol clutched a lane rope, held up his right
index finger and hugged his friend.

But there was a delay in putting up the official results. After
several minutes, the scoreboard flashed "DSQ" beside Peirsol's
name -- a disqualification. The crowd gasped and then began to boo.
Still standing on deck, the 21-year-old Californian shrugged his
shoulders in disbelief.

Coincidentally, Peirsol stirred controversy earlier in the meet
when he accused Japan's Kosuke Kitajima of doing an illegal dolphin
kick while winning the 100 breaststroke. Swimming officials found
nothing wrong with Kitajima's technique.