Or at least she doesn't want to be.

She doesn't want to be a symbol, either, nor the poster girl for President Bush getting four more years. On Aug. 13, Bush unleashed a new ad, featuring an Olympic swimmer, saying that "two more democracies" -- Afghanistan and Iraq -- will be competing in this year's Games thanks to efforts by his Dubyaness. 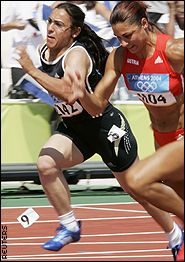 The lone Iraqi woman in Athens, Ala'a Jassim, doesn't want to be packaged by politicos as living proof of freedom and Americana and the wonderful ways of the West.

She has been, of course. But why?

Because of the way she answers in English -- which she knows very little of -- when asked after Friday morning's 100- meter dash prelim if she would be running and representing her country if Saddam Hussein were still in power: "I don't know."

Because of what Ahmed Al-Samarri, Iraq's Olympic Committee President, said: "Women's sports started from ground zero here because of the previous regime, which had abused many, many girls who wish to practice or join sports."

Because of how the crowd at the opening ceremonies strongly applauded the few Iraqi athletes, who proudly carried their flag.

Because the night before her 100-meter race, as she slept, 77 Iraqis were killed and another 70 wounded in Najaf, and American writers want to see how she feels about the current state of her country.

And because she says, "I hope I'm the first step for a new generation" of Iraqi women who will see her sprint and train and flex and sweat and work for her own singular, liberating, empowering goals.

Ala'a sprinted 100 meters Friday morning and finished last in her heat, passing at 12.70 seconds, good for 52nd out of the 63 who ran. She is shorter and stockier than the other racers, less muscular -- and less wealthy. She wore glasses when sprinting and let her long black hair flow in a ponytail as she ran. On her feet were used shoes because she has no sponsors. Her uniform was not a collage of Iraqi colors but instead just navy blue.

She was nervous before the race from being around the sculpted and endorsed competition. "I was a little afraid of competing with such big names."

Her face is angular and defined, and she has perfectly white teeth, which rarely are shown in smiles because American journalists keep asking her about the war, which for the record, she says, "was a very bad idea."

She is anxious to point out the mess that the mostly-American military has made of her country. She says in Arabic that sometimes she cannot train because of bombs or street fights.

Still, she is here.

She left Olympic Stadium as a last-place finisher, yet proudly wearing her white and green jumpsuit with IRAQ in bold, black letters.

Iraqis athletes are no longer subject to the brutal torture chambers they faced if they turned in a lousy showing.

These athletes have been interviewed a lot during the Games, and most are critical of the Bush Administration and are very opinionated about being propped up with a smiley face as champions for his re-election campaign.

The Iraqis want to make this clear: They're here for their country, their people and themselves. Ala'a Jassim is included, and Al-Samarrai said that she's Iraq's lone female "success" story this year.

Says Ala'a: "I represent not only all Iraqi women, but all Iraqi people."

Notice she didn't say Saddam, which she would have four years ago. (If she had been allowed to compete in the Olympics.)

Ala'a Jassim covered a lot of ground in those 100 meters. Whether she wanted to or not.

Seth Wickersham covers the Olympics for ESPN The Magazine. E-mail him at seth.wickersham@espn3.com.