In his rookie Olympic appearance, Alan Webb got knocked around like a freshman on his first day of high school. By the time he got to the finish line, he had been kicked in the shin, pushed, shoved and just plain beaten. 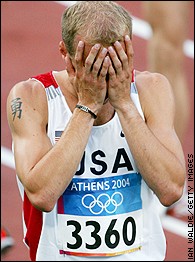 America's best miler stood in the mix zone, a stunned look in his young eyes and blood dripping from his shin as he tried to recount the 1,500 meters he had just run.

"It was like a football game out there," said Webb, 21. "I was trying to stay to the outside, stay out of trouble and it just got me in trouble even more."

His plan was to stay near the front. Not right in front, but within striking distance. Just two hundred meters into the race, jolted by a competitor's spike driven into his shin, Webb was thrown off his game.

Scurrying about trying to find his place among far more experienced competitors, Webb never got comfortable. He tried the inside. He tried the outside. He just couldn't get any respect.

There's always going to be a couple of bumps," he said. "But it just felt like every 50 meters something was happening."

He made a last-ditch effort with 300 meters to go, gaining some ground, but a sudden elbow left him off balance.

"I was right in the middle," Webb said. "I was trying to make a move and I clipped somebody. It just killed my momentum and before I knew it I was in dead last."

He crossed the line ninth in his heat and would eventually miss qualifying for the semifinals by .11 seconds.

A tough pill to swallow for a kid from Fairfax, Va., who regularly blows away his competition back home in the states.

But this isn't high school anymore, and while Webb's personal best time is a very competitive 3:32.73 (just .66 slower than the current Olympic record), Friday night he raced against the big boys. The best in the world.

Still, even on the loneliest of first days, everyone finds someone to sit with at the lunch table.

Just as Webb finished explaining his mishap in the final leg of the race, he heard a friendly voice next to him talking to reporters.

"Someone stepped on my shoe with about 300 meters to go," said Bernard Lagat from Kenya, "so I had to just kick it off completely and keep running without it."

"That was me!" Webb said looking over at the bronze medalist from Sydney in 2000.

"Yes it could be my friend here," Lagat said putting his hand on Webb's shoulder. "It's no problem."

Even better than just a friend, Webb had found an upper-classmen to take care of him. One who recognized how tough this experience can be on first-timers.

"It's always good to go home with something from the Olympics," Lagat said. "Going home with disappointment is something that is going to be hurting for a very long time."

Webb is going home with something from the Olympics: one under his belt. Sometimes that can make all the difference because next time, he will know to push back.

"I just ran a stupid race," he said. "I think it was just my inexperience. But I'm still in high spirits. I guess I did my best. I made a few mistakes but it wasn't for lack of effort."

Over the next four years, Webb will have plenty of chances to gain the experience he is lacking. Better yet, come Beijing, 2008, he'll be ready to graduate.