Still, there Stacy Dragila went, marching by the media after Saturday night's qualifying heat, head down and cap pulled over her teary eyes trying to ignore the questions. The faster she walked, the louder the voices: "Stacy, what happened?" "Stacy are you okay?" 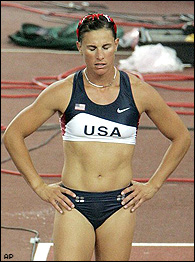 Too polite to brush off her responsibilities as the sport's spokeswoman, but too devastated to recount the past three hours, she slowed her gait, turned her head back and mustered an emotional response.

Of course there wasn't one. What is there to say when one of the best, if not the best pole vaulter in the world, fails to clear a qualifying height so low, she could have hurdled it.

It's not quite as shocking as Dan O'Brien's famous flop in the 1992 Olympic trials. But it's close.

Since Sydney, where she became pole vault's first female Olympic champion, Dragila has been the sport's poster girl. She graced the front of Wheaties boxes and magazine covers, and scored lucrative endorsement deals. Deservedly so.

She did the unthinkable: She made Americans think pole vaulting was cool.

Her sport grew, and her competitors got better, but so did she. Earlier this year, Dragila, 33, vaulted a personal record, 4.83 meters.

She faced strong competition coming into these games, but nobody would have left her off their list of medal contenders.

Unless they knew what Dragila knew.

After winning the Olympic trials in July, Dragila went to Europe to compete and stay tuned up for the games. By the end of the month, she was hobbled by pain in both of her Achilles tendons. She and her coaches sat down and tried to figure out what was different, what could be causing this pain.

"I remembered I changed my jump shoes at the trials,'" said Dragila who had calmed down just enough by the end of the hallway to talk to some reporters.

"The material was a little different, and you just don't make changes like that."

She fixed the shoe problem and for the past few weeks has been frantically trying to get healthy and back to form.

"I've been on some painkillers, and the trainers have been great," she said, still trying to fight back tears. "I've been going through walking drills and it's been fine. But I'm a jumper. I need to jump."

Whether it was true or just out of a need for mental toughness, Dragila said she really felt ready tonight. She felt fine in warm-up, but as she went through the rounds of competition she felt her timing was off.

"I was off at my mid-mark, and I didn't know what to do," said Dragila who was wondering if she should adjust the distance on her approach. "Either I was going to move back [on the in-run] and risk falling, or rushing under [the bar]."

Nothing worked, and Dragila was finished after clearing the bar just once all night. Seeing her leave before the finals was like watching a hostess leave before the party she so meticulously planned, even started.

"I thought I can do this, I can pole vault. But I couldn't pole vault tonight," Dragila said. "It's going to be a great final. I just won't be a part of it."