ATHENS, Greece -- Gail Devers, the most talented yet star-crossed hurdler of her generation, failed once again in the Olympics as she was struck by injury before the first hurdle. 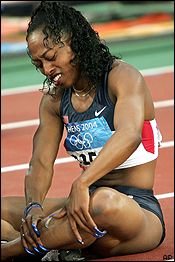 Devers, 37, who has three world championships in the 100-meter hurdles, favored her left leg coming out of the blocks, then let out a scream and pulled up short as if tugged from behind with a string. Devers slid under the first hurdle, where she stayed for a few frightening seconds as the race went on. Then she sat up and grabbed her leg before trying to walk it off. After a couple of painful steps, however, she went down again.

Devers issued a statement through USA Track & Field saying the
left leg had popped while she was warming up for the race.

"I knew before I got in the blocks that it was gone already," she said. "My
head said I'm running and if it's going to pull 10 times in the
race, it's going to have to pull. I believe I
conquered this tonight just getting out there when I already knew
it was gone. My career is not over. I'm here. I'm alive. I'm not
healthy, but I'm alive."

Devers, who was helped off as her fellow runners watched from the finish line with concern, hurt her leg in practice a week ago on a high school track in Duluth, Ga., and wore a heavy bandage during three rounds of the 100 meters on Friday and Saturday before being eliminated in the semifinals.

She has refused to discuss the injury in detail.

Sunday's shocking development might lead to second guessing about Devers' decision to run in the 100. She took the third U.S. spot in that event when Torri Edwards was suspended for two years for accidentally ingesting a banned stimulant.

Devers could have turned down the spot and focused on the hurdles, allowing Marion Jones to try to defend her Olympic title. 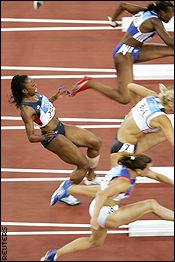 But she slammed into the last hurdle while leading the 1992
Olympic final, crawling to the finish line and finishing fifth. In
1996, she missed an Olympic medal by a hundredth of a second.

In
2000, she injured her hamstring in the semifinal and pulled up
after five hurdles.

Her elimination was the latest disappointment for a U.S. team
that is off to a very slow start in track and field in Athens --
despite a surprise bronze medal for Deena Kastor in the women's
marathon.

Belarus' Yuliya Nesterenko ended two decades of American
dominance in the women's 100 on Saturday, the same day that medal
favorite Stacy Dragila failed to make it out of pole vault
qualifying.

Also, middle-distance hopeful Alan Webb was knocked out in the
first round of the 1,500 and U.S. men's shot putters fell two
medals short of their anticipated sweep.