ATHENS, Greece -- Without any of the fanfare that accompanied her historic quest for five gold medals in at the 2000
Games, Marion Jones quietly advanced to the final of the long jump in her first appearance of these Olympics.

Jones qualified for the final with the seventh-best jump of Wednesday's qualifying round: 21 feet, 11½ inches. 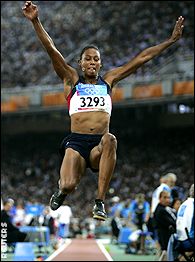 After qualifying, she quickly dressed and called it a night. She
said her experience in Athens has to do with more than just winning
another medal.

"It's a little bit about a gold, but I think to me it's a lot more about coming out here, doing my best in the midst of a hell of
a year,'' said Jones, who is the subject of a steroid investigation, has been accused by her ex-husband of using banned
drugs in Sydney and gave birth to a son 14 months ago. "I mean, you can take that how you want it -- being able to do your best in
the midst of mass chaos.''

Four years ago, Jones' quest for five golds ended in the long
jump. This time, she made her Athens debut in the event. She drew
only a smattering of applause here, with little of the celebrity
worship that engulfed her in Sydney.

On her first attempt, Jones licked her lips, then paused for the
start of a men's race. She took two quick deep breaths, sped down
the runway -- and fouled by several inches. She immediately went
over to the stands to talk with coach Dan Pfaff.

Jones opened her mouth wide and rolled her tongue around her
mouth before her second jump, then took four quick breaths. The second attempt easily surpassed the automatic qualifying distance of 21-10 to advance her to Friday's final.

At the 2000 Sydney Games, Jones already had won gold medals in
the 100 and 200 meters when she got a bronze in the long jump. She
went on to win two more medals in relays -- one gold, one bronze.

At the U.S. trials this summer, she failed to qualify in the 100
and dropped out of the 200, citing fatigue.

It was announced Wednesday night that Jones will be part of the U.S. Olympic 400-meter relay team. Women's coach Sue Humphrey made the decision official.

Jones' participation had been a subject of speculation because
she is being investigated by the U.S. Anti-Doping Agency. However,
she has not been charged with any doping offense and qualified
Wednesday night for the long jump finals.

The lineup, in order, will be Angela Williams, Jones, 100-meter
silver medalist Lauryn Williams and LaTasha Colander. That team ran
41.37 seconds, three-tenths of a second off the world record, in
Munich on Aug. 8.

Two weeks ago, Humphrey said that the four had separated
themselves from the others in the relay camp, and that no one in
the USATF had given her any reason to not run Jones in the
Olympics.

Asked about it again last week at a news conference in Athens,
Humphrey repeated the comment and said, "all I hear is rumor and
innuendo, and I don't deal in rumor and innuendo.''

Should Jones be found guilty of doping, the United States could
lose any medal it wins in the relay. However, Jones has vehemently
denied ever taking banned performance-enhancing substances.

Humphrey had said Jones was looking better each day and was far
better than at the U.S. trials, where she was fifth in the 100, and
failed to qualify in the even where she won the gold medal in
Sydney.

The 400-meter relay semifinals are Thursday night, with the
finals Friday night. Jones will compete in the long jump final on
Friday as well.

These are not the only differences from the last Olympics.

Jones was the darling of Sydney, her every move chronicled as
she aimed for five golds. Even her defense of husband C.J. Hunter
on drug charges won her praise as a supportive spouse.

Now she's under investigation by the U.S. Anti-Doping Agency,
and has been accused by the now-divorced Hunter of using banned
drugs before, during and after the Sydney Games.

"I'm looking forward to jumping on Friday and, you know what,
getting on the next plane Saturday and heading home to my little
boy, who I've been away from for over three weeks,'' Jones said.

"So things are a lot different than four years ago.''