Michael Phelps has accomplished more in swimming than he ever imagined. He has Olympic gold -- six times over. He has world records -- even while sporting a goatee. He has achieved international fame and endorsements galore. 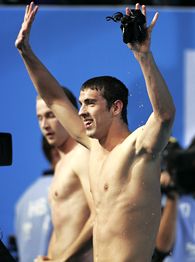 But there is one title he's really after: Becoming one of the greatest swimmers of all time, if not the greatest.

In the minds of some swimming experts, Phelps has already achieved that goal. . Even though Phelps didn't break Mark Spitz's record of seven Olympic gold medals in 1972, some believe Phelps' achievements are even more remarkable because swimmers are more specialized than ever.

Phelps has brought more attention to the sport in the United States and was the media star of the 2004 Games in Athens. This past week in Melbourne, he out-performed Aussie hero Ian Thorpe by claiming seven gold medals in one World Championship meet. Phelps fell one gold short of his goal, but it wasn't due to his own swimming. Ian Crocker DQ'ed in a relay, costing the Americans a medal.

So where does Phelps stand?

Is he better than Ian Thorpe, the recently retired Australian star who has five Olympic golds and 24 Olympic and world medals? Are Phelps' achievements better than those of Matt Biondi, who captured eight gold medals over three Olympiads, five of which came in 1988?

Where does a specialized swimmer like Aaron Peirsol fit in? He's an expert backstroker who has three Olympic golds and, prior to these World Championships, he had not lost in the 200 back in an international meet since 2000. (His streak ended in Melbourne with a silver in that event, but he did win gold and set a world record in the 100 back.)

And how do you compare eras? How does one compare a swimmer like Charles Daniel, who won five golds over three Olympics in 1904, 1906 and 1908, to swimmers of this generation? Where does Johnny Weissmuller, the "Olympic Tarzan" who never lost an official race in his career, fit in?

"I think it is hard to say that somebody is the best swimmer of all time," said Brendan Hansen, who owns world records in the 100 and 200 breaststroke. "The best way for me to describe Michael is that he is a clutch guy. When he gets into a pressure situation, he performs and that makes him a great swimmer.

"With the different areas and categories of swimming, I don't think you can outright call any swimmer the greatest swimmer of all time. There is probably some 12-year-old out there that will do better at some point."

What could set Phelps apart from the pack? Why, what else? The never-ending quest for more.

And if Olympic gold medals are indeed the gold standard, then Phelps could blow everyone out of the water. Phelps could win eight Olympic golds in Beijing and has said he plans on competing in the 2012 Olympics in London.

Since it is so difficult to compare swimmers, eras and medals, we came up with a somewhat mathematical -- but nonetheless, still imperfect -- system to calculate who would make the men's "Greatest Swimmers of All Time" list. Call it swimming's version of March Madness.

As part of our calculations, we looked at number of Olympic golds earned in individual events, as well as silvers and bronzes. We also factored in world medals. World records and relay medals were accounted for as well, although we tried to take into account whether someone earned world records in more than one stroke.

Based on our calculations prior to the World Championships, Spitz held a tenuous hold on the top spot, with 166.5 points (Phelps was No. 2 with 161.5).

Phelps' five individual golds and four individual world records in Melbourne drowned the competition and vaulted him to No. 1 with 214.5 points.

(By the way, Australia's Michael Klim finished fourth based on our calculations, but he still was bounced from the list because he has not won an Olympic gold medal in an individual event.)

So below is our list. Let's chat again next summer.