PAU, France -- You'd think after 2,630 kilometers of racing, Lance Armstrong would welcome a day away from the pressure cooker that is the Tour de France.

On Monday's rest day in the shadow of the Pyrenees, though, Armstrong would prefer to keep laying it on rather than lying around the pool. 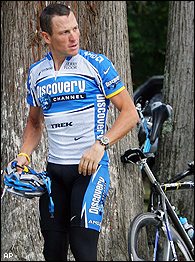 "I don't really like the rest days," Armstrong said. "The body reacts differently after a day off the bike. The day after a rest day is always tricky."

Cruise control is the concept that comes to mind to describe Armstrong's situation with six days remaining in his professional cycling career.

Italian Ivan Basso is the closest of his rivals, and he's a comfortable 2 minutes, 46 seconds behind. Meanwhile, 1997 Tour winner Jan Ullrich is fourth at 5:58 back and all but conceding the race.

The six-time champion is one week away from his most immediate goals: winning an unprecedented seventh title and retiring at the top of his game.

"The big opportunities for his main rivals to take time on Lance are gone," said Discovery Channel sport director Johan Bruyneel. "The time we have now -- it's enough."

Armstrong endured a string of attacks through a week of hard racing over the monstrous Alps and up the steep Pyrenees, fending off Michael Rasmussen, Alejandro Valverde, Alexandre Vinokourov, Ullrich and Basso.

As in every July since 1999, Armstrong escaped the decisive mountain stages with a firm grip on the yellow jersey.

"It's more secure, but it's not final," Armstrong said. "We have to be safe and know there are still some tough days to come."

With a week left in the Tour, can anyone -- or anything -- stop Armstrong?

A week to go
The mood at the Discovery Channel hotel on Monday's rest day was euphoric.

Armstrong has been trying to enjoy his final Tour while not forgetting about the sometimes messy business of kicking some Texas-sized butt on Europe's steepest roads.

On Monday, Armstrong was strolling around the grounds of the Villa Navarre in the company of rock-star girlfriend Sheryl Crow (and two bodyguards). Two dozen or so fans craned their necks from outside the gate to catch a glimpse of the star couple.

George Hincapie -- the tall, burly New Yorker who's the only rider to be part of each of Armstrong's six record Tour wins -- was still flying high after his victory in Sunday's epic climbing stage across the Pyrenees.

What's sure is that the final week of the 2005 Tour is stacked in Armstrong's favor.

Tuesday's final romp through the Pyrenees is somewhat neutralized because the final major climb of this year's course -- the 1,709-meter Col d'Aubisque -- is followed by a flat, 30-mile run to the finish.

"Tomorrow is a difficult stage, but the top of the last climb is pretty far from the finish," Bruyneel said. "We have to be careful now, relying on the team to keep Lance out of trouble."

Wednesday's 17th stage to Revel and Friday's 19th stage to Le Puy-en-Velay are hilly, relatively routine stages that push the Tour peloton ever closer to Paris for Sunday's finale on the Champs-Elysees.

Thursday's 18th stage across the Massif Central, with a short, but steep climbing finish to Mende, presents the final chance for the climbers to take anything out of Armstrong. But at 5 kilometers long, the Tour's last hump is hardly on par with the monster climbs of the high mountains, and it should be little more than a speed bump for Armstrong's high-octane engine.

"The last mountain to Mende is a lot harder than everyone thinks," ever-cautious Bruyneel said. "If you have a bad moment, you can lose a minute or two."

Saturday's 55.5km individual time trial -- when riders race one at a time against the clock -- looks to be Armstrong's best and last chance to win a stage in this year's Tour.

So far this year, he has finished second twice in stages, and Sunday's long breakaway stole Armstrong's thunder -- in the form of a win in his final mountaintop finish, anyway -- but he already has admitted that winning the maillot jaune is all that matters.

"I'm here to win the seventh Tour, not to win stages," he said. "I want to ride a smart race and win the Tour again. That's the most important."

The only thing that can stop Armstrong now is a crash, an illness or an act of God. Since Armstrong isn't a regular churchgoer, caution on the roads and at the dinner table should keep him out of trouble.

"You never know, you go to a village and take a turn too fast and break your collarbone -- Tour de France over," Armstrong said. "We have a week to go and a lot of things can get in the way."

Rivals riding for second
Armstrong's rivals woke up Monday morning wondering what they could have done to have derailed the Texan.

This year, he seemed to be a little less focused and his team a little off its trademark dominance. Armstrong was caught without teammates on an easy climb in the Vosges, then Ullrich's strong T-Mobile squad left Armstrong isolated again on the final climbs in Saturday's grueling stage to Ax-3 Domaine.

Each time, Armstrong was able to fend off the attacks.

"I hope to finish on the podium now," said Ullrich, fourth overall at 5:58 back. "We tried everything to crack Armstrong, but he's as strong as ever. Now I hope to be able to move onto the podium."

Basso, the 27-year-old Italian many peg as the future Tour winner, attacked Armstrong relentlessly in the weekend's climbing stages in the Pyrenees. All that did was help Armstrong put distance on skinny climber Rasmussen, who fell from second at 38 seconds back to third at 3:09 back.

"I rode 100 percent, full gas, as hard as I could to try to crack him," said Basso, second overall at 2:46 back. "I didn't see one sign of weakness. You simply cannot drop him."

Rasmussen, a former world mountain bike champion, wilted under Armstrong's barrage in the Pyrenees. The Dane was unable to follow Armstrong, let alone try to lay open an assault to wrestle away the yellow jersey.

"I hope I can defend my position on the podium," Rasmussen admitted after Sunday's stage. "Armstrong was too strong to attack, and I had to ride defensively to limit the damage."

For Armstrong, it's the final week of his career. The hard part of the Tour is over. Midway through Tuesday's mountain stage, once the peloton rolls over the gnarled Col d'Aubisque, it will be literally downhill all the way to Paris.

He can't wait to get there.

Andrew Hood is a freelance writer living in Spain and the author of "Armstrong Rewrites History: The 2004 Tour de France" for VeloPress. This is his 10th year covering the Tour de France.