NOIRMOUTIER-EN-L'ILE, France -- No easing up for Lance
Armstrong in his last Tour de France. 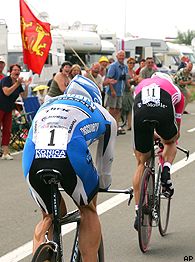 Armstrong took a huge step toward winning his seventh
consecutive Tour on the very first day of the three-week race. He
crushed his main rivals in an opening time trial Saturday, opening
up early time gaps that may be big enough to carry him through to
victory at the finish in Paris on July 24.

"I was hungry today," said Armstrong, who is 33 and has said
he will retire after this year's Tour. "I didn't come to ride a
retirement race. I came to win."

A bad crash, an uncharacteristic drop in his devastating form
and the sheer unpredictability of a race that covers 2,242 miles,
the Alps and the Pyrenees still could conspire against Armstrong,
whose six titles are already the Tour record.

But this much is clear: Armstrong's challengers will need the
race of their lives to catch him and -- if previous years are any
guide -- that still may not be enough.

The only blot on an otherwise perfect Saturday for Armstrong? He
was beaten by a fellow American and former teammate, David
Zabriskie, by 2 seconds over the 11.8-mile course past oyster
vendors and marshes from Fromentine to the island of
Noirmoutier-en-l'Ile on western France's Atlantic coast.

But Zabriskie, for all his promise, is not considered a
contender for the overall title at the still tender age for a
cyclist of 26.

Armstrong, racing a special aerodynamic bike, helmet and suit,
set out last of the 189 riders and had a minor mishap at the outset
when one of his feet popped out of a pedal. But he quickly clipped
it back and then pedaled relentlessly.

He dealt a severe psychological and racing blow to his main
rival, Jan Ullrich, by overtaking him along the way -- even though
the German had set out 1 minute earlier.

"The feeling of being passed by Lance is not good," Ullrich
said later. He tried to put a brave face on the defeat, saying:
"The Tour is still three weeks long. I'll battle."

The closest of Armstrong's main rivals was Alexandre Vinokourov,
Ullrich's teammate from Kazakhstan. He placed third but was still
51 seconds slower than the Texan.

Ullrich placed 12th, a whopping 1 minute and 6 seconds slower
than Armstrong. That already is larger than Armstrong's winning
margin over Ullrich in 2003, when he won by 61 seconds -- by far the
narrowest of his victories.

Armstrong and Ullrich's team both said the German, who has
finished runner-up four times since his only win in 1997, may have
been affected by a training crash on Friday. Ullrich cut his neck
after slamming into the back of a car.

"That takes a lot out of you and I can't say I won the Tour de
France just because of that," Armstrong said, suggesting that he
still regards Ullrich as a challenger.

But Armstrong also savored the satisfaction of overtaking the
German.

"I saw Jan in front of me at the first time check and I
thought: 'It's going well today.' I had him in my sights. Then I
did my maximum," he said. "You can't lie. That's a good feeling
in the sense that you know you're having a good day."

Italian Ivan Basso, another favorite, finished 1:24 slower than
Armstrong in 20th place. Spanish racers Roberto Heras and Iban Mayo
will need astounding rides in the mountains where they are
strongest to have a hope of making up time on Armstrong. Heras went
2:18 slower than Armstrong; Mayo was 3:13 back in 175th place.

Zabriskie's ride earned him the overall leader's yellow jersey
and was the fastest in a time trial in the Tour's 102-year history
-- a remarkable feat for his first-ever day in the race.

"This feels really great," said Zabriskie, who considered
quitting cycling after a bad crash last year. "I never thought
this would happen. Never, ever, ever."

Zabriskie still has screws in one knee from another crash in
2003 when he broke his leg and wrist after being hit by an SUV in
his hometown of Salt Lake City.

Zabriskie covered Saturday's course in 20 minutes, 51 seconds,
riding at an average of 33.98 mph.

That beat the time-trial record held since 1989 by another
American, Greg Lemond, who raced at an average speed of 33.89 mph
over a course that was 3.4 miles longer in winning the second of
his three Tour crowns.

Zabriskie rode for Armstrong's camp from 2001-2004 and now races
for Team CSC. He won another time trial at the Giro d'Italia in
May.

"We just witnessed the birth of a real champion for the time
trial event," said his teammate and fellow American, Bobby Julich,
who placed 11th on Saturday. "He just creamed everybody."