In a thrilling finish -- during which the overall race leader
crashed into a barricade -- Armstrong and his Discovery Channel
mates set a record of 35.54 mph Tuesday while winning the team time
trial. The victory handed the 33-year-old Texan the lead after only
four stages.

Armstrong will ride Wednesday wearing the distinctive yellow
shirt -- the 67th time he has done so -- and maintaining a critical
edge in his bid for an unprecedented seventh straight victory in
his farewell Tour. 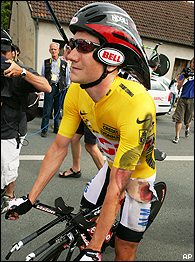 "It was the plan was to take the jersey, but the priority was
to have the best race possible, and gain time on our adversaries,"
a beaming Armstrong said.

Armstrong chiseled out a 1:21 lead over T-Mobile's Alexandre
Vinokourov, while CSC's Ivan Basso was 1:26 back. Germany's Jan
Ullrich, the 1997 Tour winner, was 1:36 behind the leader.

Discovery Channel now commands seven of the top 15 spots in the
standings, with Armstrong sidekick George Hincapie in second.

"The Dream Team," Armstrong said. "For me, in the last year,
it's special to have a team like this."

Under overcast skies, the nine-man teams set off one by one
through the Loire River valley, known for its majestic medieval and
Renaissance castles, and through the town of Amboise, where
Leonardo da Vinci spent the last years of his life.

Now, Armstrong and Discovery must decide strategy: maintain the
race lead or relinquish the yellow jersey, and the resulting
pressure, for now, in hopes of regaining it by the July 24 finish
in Paris.

"It's always nice to be in yellow," Armstrong said. "There
are three or four flat stages coming, so it will not be easy to
defend the jersey."

American rider David Zabriskie of Team CSC began the stage wearing the yellow, but crashed in the final mile after misjudging
a turn. He climbed back onto his bicycle and rode gingerly across
the finish line alone, his uniform in shreds and left thigh
scraped.

Though his CSC teammates raced ahead and were runners-up -- 2
seconds behind Discovery -- Zabriskie fell to ninth and now trails
Armstrong by 1:26.

He needed stitches to close a gash on his right arm, but X-rays
on his right knee, elbow and wrist showed no broken bones, CSC team
spokesman Brian Nygaard said. Zabriskie said he planned to race on
Wednesday.

"The [team time trial] is so hard at the end that everybody's
on the limit, everybody's a little bit cross-eyed," he said. "You
come into the city, there's a lot of turns and you get the whipping
wind and it's easy to make a mistake like that. So I can clearly
see how it happened, but it's clearly a bad one for him."

With their legs pumping rhythmically, the Discovery team moved
forward in single file -- with riders swapping the lead to share the
effort of battling wind drag at the front.

Team director Johan Bruyneel said he was happy the race went
according to plan, and that Discovery met the challenge of strong
teams such as CSC and Switzerland's Phonak.

"It was a very tight matchup, as we expected. We kept a good
rhythm," he said. "We stayed together -- that was the secret. It
was a beautiful machine operating."

T-Mobile was third, 35 seconds off the pace. But because of a
controversial race rule that limits time losses in the team time
trial, the German squad lost only 30 seconds overall.

The riders now will embark on three relatively flat stages
toward Germany, starting with a 113.5-mile stage Wednesday from the
Chambord castle to the industrial town of Montargis.

Armstrong insisted the yellow jersey does not mean the rest of
the race will be easy.

"There's still a lot of racing to go, a lot of nervous days.
Anything can happen, crashes here, crashes there, especially the
stages in the [next] few days, which are tricky," he said.