PARIS -- One last time, "The Star-Spangled Banner" rang
out over the Champs-Elysees in honor of Lance Armstrong.

One last time, on the podium against the backdrop of the Arc de
Triomphe, the cancer survivor who became the greatest cyclist in
Tour de France history slipped into the leader's yellow jersey
Sunday. This time, it was the winner's jersey, for an unprecedented
seventh consecutive year in the world's most grueling race.

He held his yellow cap over his heart as the American anthem
played, and his twin 3-year-old daughters, Grace and Isabelle, wore
matching yellow dresses.

Vive Lance, the once but not future champion.

It was the end of Armstrong's amazing career, and in retiring a
winner he achieved a rare feat in sports -- going out on top. He
said his decision was final and that he walks away with no regrets.

"I'm finished," Armstrong told a motorcycle-borne TV reporter
as he rode a victory lap of the Champs-Elysees, waving to the
crowds and accompanied by another rider waving the Stars and
Stripes.

On Monday, he'll be on a beach in the south of France, "with a
beer, having a blast," he said.

Before that, though, he couldn't resist a parting shot at "the
people who don't believe in cycling, the cynics and the skeptics"
who suspect that doping is rife and fueled his dominance of the
past seven years. 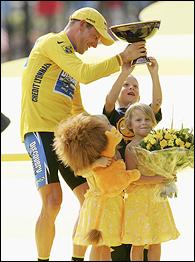 Race organizers afforded the 33-year-old Texan the unprecedented
honor of speaking from the podium. And that came after an unusual
ending to the overall race.

With the pavement slick from rain, and Armstrong comfortably
ahead, he was declared the winner with 30 miles to go. The rare
decision was made rather than risk having a mad dash to the finish
in treacherous conditions.

Riders were still racing at the time, with eight laps of the
Champs-Elysees to complete, and the stage competition continued.

Alexandre Vinokourov of Kazakhstan eventually won the final
stage, with Armstrong finishing safely in the pack to win the Tour
by more than 4 minutes, 40 seconds over Ivan Basso of Italy. The
1997 Tour winner, Jan Ullrich, was third, 6:21 back.

"What he did was sensational," Ullrich said.

Looking toward a Tour without him, Armstrong said to his
challengers, "It's up to you guys."

One hand on his handlebars, the other holding a flute of
champagne, Armstrong toasted his teammates as he pedaled into Paris
to collect his crown. At different points, he held up seven fingers
-- one for each win -- and a piece of paper with the number 7 on it.

Looking gaunt, his cheeks hollow after riding 2,232.7 miles
across France and its mountains for three weeks, Armstrong still
could smile at the end.

President Bush called to congratulate his fellow Texan for "a
great triumph of the human spirit," saying the victory was "a
testament not only to your athletic talent, but to your courage."

"Daddy, can we go home and play?" the boy whispered to him as
he stepped off the podium.

Armstrong choked up on the podium and rock star girlfriend
Sheryl Crow, wearing a yellow halter top, cried during the
ceremony.

"This is the way he wanted to finish his career, so it's very
emotional," she said.

Armstrong set the record last year with his sixth win -- one more
than Frenchmen Jacques Anquetil and Bernard Hinault, Belgian Eddy
Merckx and Spaniard Miguel Indurain -- and No. 7 confirmed him as
one of the greatest cyclists ever.

"Those are guys that you look up to you, guys that have been at
the top of their game for a long time," he said.

As for his accomplishments, he said, "I can't be in charge of
dictating what it says or how you remember it.

"In five, 10, 15, 20 years, we'll see what the legacy is. But I
think we did come along and revolutionize the cycling part, the
training part, the equipment part. We're fanatics."

Armstrong's last ride as a professional -- the closing 89.8-mile
21st stage into Paris from Corbeil-Essonnes south of the capital --
was not without incident.

Three of his teammates slipped and crashed on the road coming
around a bend just before they crossed the River Seine. Armstrong,
right behind them, braked and skidded into the fallen riders, using
his right foot to steady himself and stay on the bike.

His teammates, wearing special shirts with a band of yellow on
right shoulder, recovered and led him up the Champs-Elysees at the
front of the pack.

Vinokourov surged ahead of the main pack to win the last stage.
He had been touted as one of Armstrong's main rivals at the start
of the Tour on July 2, but like others was overwhelmed by him.

Armstrong donned his 83rd and last yellow jersey in Paris. Only
Merckx -- with 111 -- won more.

Armstrong's departure begins a new era for the 102-year-old
Tour, with no clear successor. His riding and his inspiring
comeback from testicular cancer attracted new fans -- especially in
the United States -- to the race, as much a part of French summers
as sun cream, forest fires and traffic jams down to the Cote
d'Azur.

Millions turned out each year, cheering, picnicking and sipping
wine by the side of the road, to watch Armstrong flash past in the
yellow jersey, the famed "maillot jaune."

Cancer survivors, autograph hunters and admirers pushed, shoved
and yelled "Lance! Lance!" outside his bus in the mornings for a
smile, a signature or a just word from the champion.

He had bodyguards to keep the crowds at bay -- ruffling feathers
of cycling purists who sniffed at his "American" ways.

Some spectators would shout obscenities or "Dope!" To some,
his comeback from cancer and his uphill bursts of speed that left
rivals gasping in the Alps and Pyrenees were too good to be true.

Armstrong insisted that he simply trained, worked and prepared
harder than anyone. He was drug-tested hundreds of times, in and
out of competition, but was never found to have committed any
infractions.

Armstrong came into this Tour saying he had a dual objective --
winning the race and the hearts of French fans. He was more
relaxed, forthcoming and talkative than last year, when the
pressure was on to be the first six-time winner.

Some fans hung the Stars and Stripes on barriers that lined the
Champs-Elysees on Sunday. Around France, some also urged Armstrong
to go for an eighth win next year-- holding up placards and daubing
their appeals in paint on the road.

Armstrong, however, wanted to go out on top -- and not let
advancing age get the better of him.

"At some point you turn 34, or you turn 35, the others make a
big step up, and when your age catches up, you take a big step
down," he said Saturday after he won the final time trial, his
only stage victory this year. "So next could be the year if I
continued that I lose that five minutes. We are never going to
know."