Written off by pundits and rivals after bonking spectacularly in the yellow jersey in Wednesday's climbing stage and tumbling out of the top 10, Landis bounced back Thursday to deliver one of the most incredible resurrections in cycling history.

Now third at just 30 seconds back, he's in the pole position to win the 2006 Tour after winning Thursday's stage with an emphatic solo attack in the style of cycling's greatest heroes. 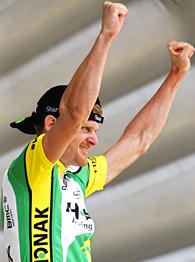 "What Floyd Landis did today was something mythic," said Juan Fernandez, Landis' sport director on the Phonak team. "This is something you can write in the history books, like the exploits of Eddy Merckx or Bernard Hinault. He was like a wounded lion. He wanted to take out the spine in his back and show the world who he was."

Fueled by anger, frustration and determination, Landis executed one of the most audacious attacks in cycling lore.

Defying conventional wisdom that says the favorites must wait until the final climb, Landis had nothing to lose and attacked on the lower reaches of the Col des Saisies, about 65 kilometers into the 200.5-kilometer stage.

Riding with wild abandon, he reeled in and then dropped an early breakaway, and then drilled it over four more steep climbs, including the knee-busting steep climb over the Col de Joux-Plane, towering 12 kilometers above the finish line in Morzine.

By the time the overall contenders organized a chase, it was too late. Landis beat second-place rider Carlos Sastre by 5:42 and race leader Oscar Pereiro by 7:08, clawing back out of the grave, moving from 11th at 8:08 back to third at 30 seconds back of Pereiro.

"This morning I saw the papers and they said I was out of the Tour, that made me mad," Landis said. "It wouldn't be any fun if I told you what happens next, but I think it's pretty obvious. I'd like to win the race."

The idea that Landis could win the race seemed unimaginable 24 hours ago and his comeback has few comparisons in the annals of cycling's century-old history.

"Floyd Landis turned himself around from a defeated, broken man to a probable Tour de France winner in the space of a six-hour stage," said Paul Sherwen, a former pro and play-by-play announcer for OLN's live Tour coverage. "What he did today was ride himself back into contention. Theoretically, that was impossible."

There have been equally spectacular bonks and there have been even more incredible comebacks, but having both packed into a 24-hour period is unlike anything seen before.

During Lance Armstrong's seven-year stranglehold on the Tour, the authoritarian Texan never truly had a bad day on the scale of Landis' implosion.

In 2000, Armstrong bonked over the Joux-Plane and suffered a similar fracture in a 2003 time trial loss to Jan Ullrich, forfeiting less than two minutes each time. He would shrug off those hiccups and roll on to overall victories.

In 1998, Ullrich cracked over the Col du Galibier to surrender the race leader's maillot jaune to Marco Pantani, but bounced back to win the next day's stage. But Big Jan only finished second to The Pirate.

The seemingly unstoppable Miguel Indurain bonked up Les Arcs in the 1996 Tour while trying to become the first man to win six Tours, but he wasn't wearing the yellow jersey at the time and never really recovered, finishing a distant 11th overall in his final Tour.

For similar exploits, you have turn back several pages in cycling's rich history.

In 1989, Greg LeMond came back from a life-threatening turkey hunting accident to win the Tour in a gripping, final-day time trial showdown in Paris. LeMond started the 24-kilometer stage 50 seconds behind race leader Laurent Fignon, but used special aero-bars and helmet to win the race by 8 seconds, the narrowest margin of victory in Tour history.

Italian attacker Claudio Chiappucci went on a similar suicidal attack over the Alps in 1992, winning at Sestrieres, but he never could steal away the yellow jersey from Indurain and settled for second overall.

Merckx, cycling's greatest racer, had similar extreme swings during his reign in the late 1960s to mid-1970s.

In 1971, Merckx was the heavy favorite for a third Tour when Spanish rider Luis Ocaña took a nine-minute lead midway through the race. Ocaña showed no signs of cracking, but Merckx went on a daring attack on the Col de Mente only to crash. Ocaña also crashed and was hit by another rider and was forced to abandon with severe injuries. Merckx refused to wear the maillot jaune the next day, but went on to win.

Ironically, it was a Merckx who had a hand in Landis' revival on Thursday. His son, Axel, is one of Landis' key teammates on Phonak. Team manager John Lelangue is also the son of Robert Lelangue, who was the sport director at Merckx's Molteni team in 1971. Both the elder Merckx and Lelangue called Wednesday evening to tell the team nothing is impossible in the Tour de France.

"My father called me after Wednesday's stage and told me, 'The race isn't over,'" Lelangue recounted. "Eddy Merckx was also on the phone, trying to give us some advice. He said the race is not lost and told us to go on the attack."

Landis woke up Thursday intent on erasing the image from the previous day, when he was bonked and beaten, looking defeat in the face. Just what did Landis eat for breakfast to propel him?

"He had muesli, an omelet, pasta, cereal, and a lot of belief," said Allen Lim, Landis' trainer. "He never doubted himself, even after the bad day, because it was just a bad day. Today was a good day."

With Saturday's decisive 57-kilometer time trial on tap to decide the overall winner, Landis once again is poised to become just the third American to win cycling's greatest race.

Everyone had written him off 24 hours ago. Now, Landis is writing the story for the ages.

Andrew Hood is a freelance writer based in Spain who has covered the Tour de France for ESPN.com since 1996.