STRASBOURG, France -- George Hincapie took the overall lead
Sunday in a Tour de France blown wide open with the loss of top
riders in a doping scandal, while Frenchman Jimmy Casper won a
sprint finish to capture the first stage. 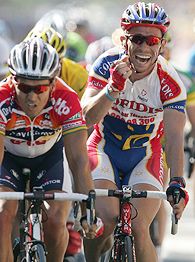 Hincapie rode with Lance Armstrong on all of his record seven
Tour victories. Now, with Armstrong retired, the American is
looking to make his own mark.

Norway's Thor Hushovd, winner of the opening prologue, needed
stitches at a hospital for a bloody gash on his right arm. He rode
into a cardboard promotional item that a fan dangled over the
course in the sprint, prompting new security measures. Hushovd
finished ninth and organizers expect him to race Monday.

"We managed to stop the bleeding. It's a deep wound but not
a serious one," said doctor Gerard Porte, head of the Tour
medical team.

The Norwegian had been the leader after capturing Saturday's
time trial, but Hincapie picked up bonus time on a sprint section
of Sunday's course. The New York-born rider will wear the yellow
jersey for the first time Monday in the second stage of the
three-week race.

Hincapie is among the new favorites following the withdrawal of
Ivan Basso and Jan Ullrich on Friday because of doping allegations.
He said he had been "very disappointed" to lose to Hushovd by a
split second Saturday.

He bounced back by becoming the fourth American to earn the
yellow jersey after Armstrong, three-time Tour champion Greg LeMond
and time-trial specialist David Zabriskie.

"I really wanted the yellow jersey," he said. It was "a big
accomplishment for me. If I could hold it for another day or two
that would be great."

Hincapie showed last year he can be a force in the mountains
that come later by winning a brutal stage in the Pyrenees. On
Sunday, he showed race savvy.

He seemed to surprise Hushovd by racing ahead of the main pack
heading into the last of three intermediate sprint stages along the
115-mile route.

Those sprints offer bonus seconds to the first three riders that
go through. Hincapie was third, picking up two seconds, more than
enough to make up the milliseconds he lost to Hushovd on Saturday.

"I saw an opportunity that I couldn't pass up," he said. "I
took it and I think I made a great decision."

Hushovd's main goal is to retain the green jersey he won last
year as best sprinter. He's not seen as a threat for overall title
because he struggles in the mountains.

Casper beat out Australia's Robbie McEwen and German veteran
Erik Zabel in the finishing sprint into Strasbourg in eastern
France. All three riders were given the same time.

"It's the most beautiful day in my life," said Casper, whose
victory gave him the green jersey.

"The door opened at the right time for me in this sprint. I
hope I can repeat this feat."

Hushovd was injured when he grazed a giant green cardboard hand
that a Tour sponsor gives to fans. Many spectators held out the
cardboard hands as they cheered the riders.

Organizers said the "hands" will now be prohibited in the
arrival zone. Security teams will patrol the barriers that line the
area and make regular announcements of safety measures.

Casper said it was not the first time a rider had been hurt like
that.

"It would be good to get rid of those hands," he said.