FOIX, France -- Late Sunday afternoon, about a mile from the finish line atop Plateau de Beille near the Spanish border, the two men who are now in the best position to win the Tour de France had a short conversation only they could hear.

Michael Rasmussen is the Danish leader of a Dutch team whose wife is Mexican. Alberto Contador is a Spaniard who rides for the American-owned Discovery Channel team. We don't know how effective their verbal communication might have been, but the universal sign language was unmistakable. 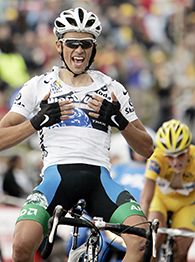 This kind of chat isn't uncommon in this scenario. Two men near the end of a long day of riding have an interest in working together to try to gain time on their chief rivals. One leads the race; the other is a challenger, and wants something for his cooperation, like a stage win.

Rasmussen denied he made any compromises. "No, definitely not," he said, his pinched features pink with exertion. "This is the Tour de France -- you don't give any presents here. It was a very well-deserved win for Contador … we were both racing at 100 percent for the victory."

Contador related a somewhat different version of events, first to Spanish radio, then to French television, then to the assembled print media. In short, he said Rasmussen agreed to let him go, but surprised him with an acceleration near the finish. In the end, whether it was preordained or not, Contador blew by Rasmussen for his first career Tour stage win.

The circumstances of the finish are destined to remain one of those silly little he-said, he-said Tour gamesmanship intrigues that will linger into posterity.

Lance Armstrong and Marco Pantani never could agree who gave what to whom when they sprinted to the summit of Mont Ventoux in the 2000 Tour. Pantani, who slipped around Armstrong in the end, later disputed Armstrong's account that it was a gift. He took his side of the affair to his premature grave.

One thing is certain, though. Any deal-or-no-deal debate over the legitimacy of Sunday's win is a far smaller issue than what may ultimately be said if Rasmussen wins the Tour.

Before Rasmussen began his poststage Q-and-A session with reporters, Rabobank team spokesman Jacob Bergsma interjected that he would only answer inquiries about the race -- a clear attempt to fend off any more mention of the various doping controversies that are trailing in Rasmussen's slipstream, from missed tests to an alleged five-year-old attempt to get an American friend to serve as a mule for illicit products.

Jamey Keaten of The Associated Press elected not to follow that dictate, and asked Rasmussen how he could justify his lack of transparency given the public's doubts about the sport's ability to police itself. Keaten cited a poll that appeared in the national French newspaper Le Journal du Dimanche, in which 780 of 1,000 people surveyed said they had doubts about the "honesty" of cycling competition.

"For now, I'm trying to stay focused on cycling," Rasmussen said. "I have one more week of hard competition and if I have to deal with everything else, I go crazy."

Well, join the crowd. It will make a lot of people a little nuts if Rasmussen gets to Paris in the yellow jersey, given the very slim odds that any of the questions raised about him in the past week will be resolved.

It is not Rasmussen's fault that he remains unpunished for the four separate violations of anti-doping protocol in the last 16 months that are now being reported by two different entities -- Danish national anti-doping authorities and the UCI, cycling's international governing body.

Two involved actual missed tests, for which Rasmussen was AWOL instead of where he said he would be when the tester showed up; two more have to do with late or missing paperwork regarding his whereabouts, which every athlete subject to international anti-doping regulations is responsible for filing.

But it takes three violations by the same body to trigger official sanctions -- another example of the many loopholes remaining in an anti-doping testing and adjudication system that at times resembles a tax code (and, minus an IRS-like enforcer, is probably stretched and abused just as much).

The ante was upped again Sunday as the Sunday Times of London followed a story broken a few days ago by VeloNews.com in which former mountain biker Whitney Richards accused Rasmussen of trying to dupe him into carrying a product made from cow's blood from Colorado to Europe in 2002. Richards told sportswriter David Walsh that he intends to tell his story to authorities, including the UCI.

The fine dust of disbelief has inevitably settled onto the wide-angle lens trained on this Tour de France even though there is some evidence that the peloton is gradually cleaning up its act.

It will be a good day when good days aren't viewed with suspicion. It will be an ideal, and likely still faraway day when riders don't feel the need to take the athletic Fifth Amendment in order to concentrate during competitions.