PAU, France -- For just a moment Tuesday, David Millar, a former world champion, one of the most respected riders in the peloton not only for his skill pedaling a bike but his candor off it, was reduced to being a fan.

A devastated, disillusioned, stricken fan by the side of the road.

Millar, like everyone else gathered in the big ballroom serving as the Tour de France headquarters on the second rest day of the race, had been broadsided moments before by the news that Alexandre Vinokourov had tested positive for a banned blood transfusion Saturday, the day he won the Stage 13 time trial. 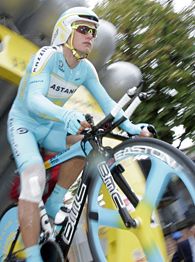 The 30-year-old Scot would have been well within his rights to decline comment, to say he wanted to wait for more information, to get up and walk out and keep his thoughts to himself. Instead, Millar answered questions on the topic for nearly half an hour, increasingly struggling with his emotions, until the knot of reporters finally broke up.

"Are you all right?" asked British journalist Jeremy Whittle, who has known the lanky rider since Millar was a teenager, about to sign his first professional contract.

"I'm gutted," Millar said, swaying a bit unsteadily on his feet. "I feel like crying."

And then he sat down and wept.

Before the story burst into the open, Millar had been sitting in the front of the room with a couple of teammates and staff from his Saunier-Duval squad. They were conducting a news conference that began with pleasantries about a tree-planting program the team is sponsoring in the African nation of Mali.

Inevitably, the questioning moved on to doping, and Millar picked up the microphone, knowing he would be expected to speak.

Millar has been a standard-bearer for clean sport since he confessed to using the blood-boosting agent EPO in 2004 after police raided his home in Biarritz, France, as part of an investigation into his then-team, Cofidis, and found paraphernalia from the medication.

He outed himself before authorities did and told a chilling and cautionary tale of doping, feeling guilty about it and keeping the evidence as a reminder that he had competed under false premises.

The time trial specialist served a two-year suspension and when he returned for last year's Tour de France, he became an instant novelty: The Honest Guy. Talking to Millar was like interviewing someone who'd been through a near-death experience. There aren't a lot of people who have seen the white light and returned to tell their story.

And he told it over and over and over. Being the go-to guy for the most thorny, depressing and repetitive subject in the sport isn't an easy or pleasant job, but Millar has done it tirelessly, humbly and gracefully.

"It's probably my permanent role," he said Tuesday before all hell broke loose.

I really wanted to believe he was having a good day. Vino is one of my favorite riders, one of the most beautiful riders in the peloton. If a rider of his stature and class has done this in the current situation, we might as well pack up our bags and leave.

Irish journalist Paul Kimmage, a former rider, asked Millar how he coped with the knowledge that he was competing against some teams that want to do things "the old way," and others who are aggressively trying to root out cheating.

Millar responded in his usual nuanced, thoughtful way: "When you're racing, even if you have doubts, you're never 100 percent sure. In order to carry on racing, you have to give them the benefit of the doubt. Otherwise, there's no point in starting."

I asked him if he was disappointed that the rumors and allegations against Tour leader Michael Rasmussen had overshadowed the ongoing efforts to clean up the race.

"Let's face it, it's not a surprise," Millar said. "If we've learned anything from this, it shows how much work still needs to be done. We need a better out-of-competition testing system in place. Although what [Rasmussen] has done is very suspicious, he hasn't broken any rules.

"The questions are necessary. The fans, we the riders, you the journalists, we still don't know what's going on."

That point was underscored with theatrical swiftness a couple of minutes later, when a hubbub erupted in the back of the room. The journalists who hadn't been listening to Millar rushed up and a reporter blurted out the news about Vinokourov.

"I really wanted to believe he was having a good day. This makes me very sad. Vino is one of my favorite riders, one of the most beautiful riders in the peloton. If a rider of his stature and class has done this in the current situation, we might as well pack up our bags and leave."

That, as race officials confirmed a little later, is not going to happen. Vinokourov's Astana team has withdrawn from the race and the show will go on.

The Saunier-Duval portion of the event abruptly ended, but Millar kept talking, in English and French, to anyone who had questions. He oscillated between anger, disbelief and a fierceness that made it easy to see how he might be a guy who could excel even against riders who have a chemical advantage.

"I have the impression that the riders will never understand it," Millar said. "There has to be a generational shift.

"I will stay loyal to my sport. I'm doing it all without any kind of shots, clean. I will win a stage in the Tour de France and show the younger generation it can be done."

Just a few minutes later, he was in tears.

Anyone who loves cycling knows exactly how he feels.