ANGOULEME, France -- With Lance Armstrong chattering in his
ear, Alberto Contador churned out the miles, his lead dwindling
along with the chance to wear the winner's yellow jersey at a Tour
de France that will be remembered for its scandals. 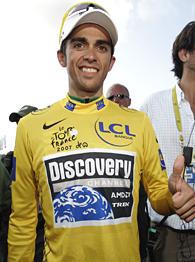 The 24-year-old Discovery Channel cyclist beat the clock in
Saturday's time trial to seal the victory at cycling's biggest
event, where the pre-race favorite was accused of cheating, and the
longtime leader was sent home for lying.

Contador entered Saturday's 19th stage with a 1 minute, 50
second lead over Cadel Evans. When it was over, teammate American
Levi Leipheimer had won the stage, and Contador was clinging to a
23-second advantage over Evans, paving the way for a ceremonial
ride along the Champs-Elysees in the heart of Paris on Sunday and
the first Tour win for Discovery since Armstrong retired.

But perhaps even that celebration will be tainted, as Contador
has not been spared the doping suspicions that seem attached to the
yellow jersey.

He missed last year's Tour when his former team, Astana, was
disqualified because he and four other riders were implicated in
the Spanish blood-doping investigation known as Operation Puerto.

French daily Le Monde, citing what it said was an investigation
file to which it had access, said Saturday that Contador's name, or
initials, appeared in documents found at the apartment of the
Spanish doctor at the center of the Spanish probe.

Contador said he was "sure" he was not involved in the case.

He said he would -- if asked -- give a DNA sample but added he
wouldn't offer it up himself.

"I'm innocent," he said. "I don't have to prove anything to
anyone."

Contador said his name mistakenly turned up in the Puerto file.